Death Where the Bad Rocks Live by C.M. Wendelboe 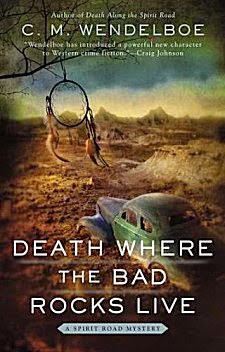 First Line: The faint whisper of wind grew louder in Moses Ten Bears's ears as the throp-throp-throp of a large aircraft cooking off speed neared.

FBI Special Agent Manny Tanno has been called out to an area the Lakota call the Stronghold, deep in Badlands National Park. During World War II, the Army Air Corps used the Stronghold as a bombing range, and now an ordnance removal crew has found a dead body in the hulk of an old car next to an unexploded bomb. When the body is exhumed, two more are found beneath it. What's even more puzzling is that the skeleton on top is decades younger than the two just underneath. As Manny sets to work, the one thing he does know is that it's not going to be easy to look up missing persons from thirty and sixty years ago.

Author C.M. Wendelboe tells his story with two different timelines: one present-day timeline with Manny trying to find out what happened so many years ago, and the second that follows Moses Ten Bears from the 1920s through to the 1940s. In many ways I found Moses's timeline to be the more interesting as it shows how life was on the reservation during that twenty year period, and how two families became entangled in lies, secrets, and the prejudices of the day.

Manny Tanno is a dogged investigator who has flashes of intuition-- but hopefully not when he's behind the wheel of a moving vehicle. (His lack of driving skills is legendary.) Raised by his uncle, he's only now forming a relationship with his older brother, who as an AIM (American Indian Movement) enforcer served time in prison for murder. Manny went to school and left the reservation to become the first Lakota FBI agent. He had no intentions of ever returning until he was sent back by his superiors in Washington, DC. There is a sharp division between his youth and his adulthood, and Manny suffers a bit of an identity crisis that can even be seen in his choice of music: "...polka, with its heavy beat so much like traditional powwow music, without causing Manny to commit to being a Lakota through and through."

Wendelboe's main character is backed by a strong supporting cast. Willie, the young man Manny is trying to train as the tribal investigator is having emotional problems as a result of events that took place in the first book in the series. (No, you don't have to read it to understand what's going on.) Then there's the running eBay fight for Elvis memorabilia between the reservation's CSI guy, Pee Pee, and the acting tribal chief of police, Lumpy Looks Twice. This brings much needed levity to the book. Memorable characters appear throughout the book, including Alexander Hamilton High Elk, who's been nominated for the U.S. Supreme Court, Manny's brother Reuben, and a little girl named Morissa Friend of All. My least favorite was Lumpy's niece Janet, a stereotypical makeup laden shopaholic that Lumpy put on the force in an attempt to straighten out Willie. All Janet seems to do is scream, throw up, shop, put on makeup, pout, rub against Willie, and find inventive new ways for the buttons to come undone on her shirt. Extremely tiresome!

Despite Janet, this is a strong book filled with people who are fighting for some kind of future while being grounded by their past. What they decide to do with those bad rocks of the title will have an impact on their future. Although there is a much stronger Native American element to Wendelboe's books-- obviously because most of the characters are Native American-- I find them enjoyable reading and complimentary to Craig Johnson's Walt Longmire novels.