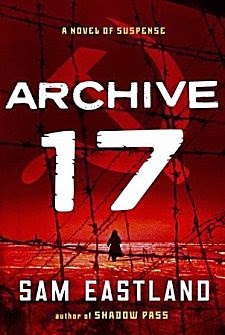 First Line: In a cave, deep underground, lit by the greasy flame of a kerosene lamp, the man knelt in a puddle, his empty hands held out as if to catch drops of water which fell through the cracks in the ceiling.

It's 1939, and Stalin desperately needs money to jumpstart the Soviet war machine in its upcoming fight against Nazi Germany. When certain information comes to light, he sends Inspector Pekkala back to Borodok, the notorious Gulag where he was imprisoned for so many years. There Pekkala will have to face his past as the Tsar's investigator as well as his horrific years in the Gulag as he tries to infiltrate a gang of convicts who are still loyal to the Tsar. Why? Because Stalin believes they know the location of the legendary missing gold of Nicholas II-- and Stalin needs it to fight the Nazis.

Sam Eastland's Inspector Pekkala novels comprise one of my favorite historical mystery series. The scenes of Tsarist and Stalinist Russia are vivid and draw me straight into the story. In the case of Archive 17, I was also drawn into the life of a Siberian Gulag, and I'm still thawing out and feeling hungry and filthy.

It's fascinating to watch Pekkala remember pieces of his past as Nicholas II's chief investigator as he tries to infiltrate the group of convicts who are still loyal to the Tsar, and those in charge at the Borodok have their own motivations that he must deal with as well. Perhaps my favorite scene in the entire book involves Pekkala's partner, Major Kirov, and the fate of an archivist and all his documents in Moscow; the possibilities linger on in my mind.

Pekkala is a bit like the Clint Eastwood we've become familiar with throughout his film career: a big, soft-spoken man who doesn't say much but observes all. A man who's learned that the only person upon whom he can rely is himself. A highly principled man who sometimes finds those principles at war with the simple need to survive. This is the third time Pekkala has tried to stay alive while keeping true to himself. Having bosses like Nicholas II and Josef Stalin, it's far from an easy task, and with historic detail, a tightly woven plot, and some heart-stopping action, Sam Eastland makes fascinating reading of Pekkala's struggles.