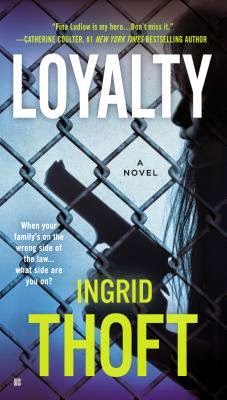 First Line: This was her punishment.

Ludlow and Associates is one of the most prestigious law firms in Boston, and Carl Ludlow rules his business with an iron fist. All of his children are lawyers in the firm but one-- Fina, the law school flunk-out-- and that fact still sticks in Carl's craw even though his daughter works for him as a skilled private investigator. Fina is the only Ludlow Carl can't control completely, and when no one else in the family seems concerned that Fina's sister-in-law Melanie has disappeared, the black sheep Ludlow starts checking things out on her own.

Although her father has insisted on no police involvement, the more Fina unearths the more she thinks she'll be unable to follow that order. And when she finally gets to the bottom of Melanie's disappearance Fina will learn just how strong her loyalty to her family is.

If you're the type of reader who has to have at least one completely likable character in the books you read, think twice before you pick up Loyalty. The Ludlow clan puts the diss in dysfunctional. Carl Ludlow and his wife are the stuff of nightmares and psychiatrists' bank accounts. They have all their children under their thumbs with the exception of Fina, who's able to crawl out from under on a regular basis.

Fina delights in being a hard-nosed, wisecracking maverick who lives on junk food and the desire to annoy her father. She knows the damage her parents have inflicted on all their children, but she still feels loyalty to the clan. After all, they're family, and there aren't that many people around who would understand anyway (even if she did feel like explaining).

Her sense of loyalty is the impetus for her investigation into her sister-in-law's disappearance. Melanie is one of the very few family members Fina likes, and with Melanie's teenage daughter Haley going off the rails, Fina knows her niece needs her mother now more than ever. So in her abrasive and sometimes combative manner, she starts looking.

Although I thought the book needed some tightening and I guessed the crucial fact very early on, I enjoyed this debut novel. I wanted to see just what sort of character Fina Ludlow was... what she would do when she was faced with some very difficult decisions. Fina answered each of my questions in no uncertain terms. I'm now looking forward to reading the second book in this series, Identity. Even though I wouldn't want to spend much time in Fina's company, I like her.