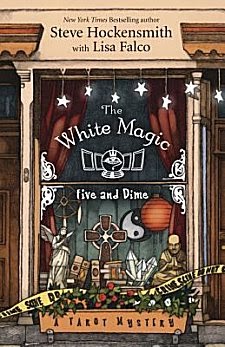 First Line: The phone rang, and I answered it.

The last thing Alanis McLachlan wanted was to have anything at all to do with her mother. She turned her back on that con woman years ago, got a decent job, and she was foolish enough to think that was that. Imagine her shock when the phone rings and she discovers that that very same parental unit died and left her The White Magic Five and Dime, a shop in tiny Berdache, Arizona, home to vortexes, crystals, and all things both ancient and New Age.

Besides a piece of property in Arizona, Alanis has a lot of questions, so she heads to Berdache to claim the business and to see if she can find out how her mother died. With a little bit of help, she begins trying to win the confidence of her mother's clients in order to get the answers to her questions.

Alanis McLachlan charmed me right away with her smart mouth and her suspicious nature, but it takes a while to understand her motivations. Through the first half of the book, we're allowed occasional glimpses of a dark childhood, and even though we're made aware of the fact that this young woman knows every trick in the book, we quickly learn to trust her.

Alanis meets her mother's teenage live-in apprentice and one of the local police as well as some of her fellow business people. She's decided that the best way to find out how her mother died is to give tarot readings to her mother's clients. At first she stumbles through all the readings, but soon she begins to find meaning in the cards, and I like the way tarot lore is woven into the very fabric of the story.

Halfway through the book, it changes from light, humorous, and slightly world weary fare to something with unexpected depth and darkness. This is when we're given much more information about Alanis's childhood and her relationship with her mother-- and it is eyeopening. I went from merely enjoying the main character's smart aleck-y attitude and persistence to being her whole-hearted supporter. The White Magic Five and Dime took a while to set up, but once it was, it became the beginning to a new series that I definitely want to read more of.