The Jackal Man by Kate Ellis 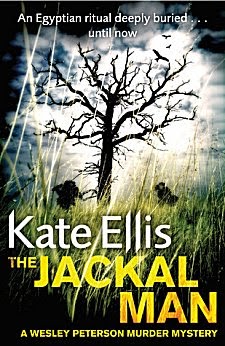 First Line: We are not of the servants' hall nor are we exalted with the angels above stairs.

Young Clare Mayers is almost killed on her way home from quiz night at her local pub. In the dark and in her panic, all she can describe seeing is "a man with a dog's head." When Detective Inspector Wesley Peterson begins his investigation, he soon learns that that dog's head ties in with other cases. Meanwhile archaeologist Neil Watson has been called to Varley Castle to examine (and possibly value) the collections of the present owner's ancestor, Frederick Varley, who managed to amass a huge collection of Egyptian antiquities. One day Neil learns something that has him on the phone immediately to his friend Wesley. Frederick Varley's son was accused of killing four women before committing suicide. It's quite possible that the old murders have some bearing on Wesley's current investigation-- especially since both old and new feature "a man with the head of a dog...."

Kate Ellis does her usual excellent job of combining two story lines separated by time. In the old investigation, we see everything through the eyes and the experiences of a governess for the Varley children, and I felt some strong ties to Anne Brontë and her novel The Tenant of Wildfell Hall. (With apologies to Ellis, I just want to say that those of you who think Emily and Charlotte were the only two Brontës who could write, you really need to read Tenant. In many ways I prefer it to the other more well-known novels.) This older story line can really take readers on a roller coaster ride because the governess is a fascinating character who evolves each time she's seen.

Wesley Peterson is one of my favorite coppers, and Ellis has given him one of the best drawn teams going. Through reading the books in this series, each police officer comes to life, each with his own foibles, and the home lives of Peterson and his boss Gerry Heffernan, often figures into their investigations.

With its disquieting ending, The Jackal Man is more than a murder investigation, and it's more than an investigation into the theft of art and antiquities. It's a look into the nature of evil and of how monsters are made. It's a worthy entry in a series for readers who like to ponder evil, for readers who like a bit of history, and for those who like their coppers to have lives outside their investigations. Kate Ellis's Wesley Peterson series has been one of the staples of my reading for years. She knows just how I like my cup of tea.