I Shall Not Want by Julia Spencer-Fleming 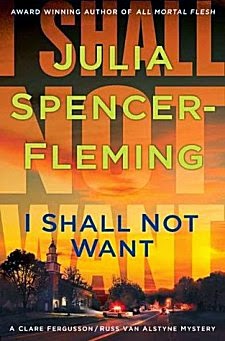 First Line: When she saw the glint of the revolver barrel through the broken glass in the window, Hadley Knox thought, I'm going to die for sixteen bucks an hour.

Millers Kill Chief of Police Russ Van Alstyne is trying to avoid thinking of his wife whom he recently lost, and he's also trying to avoid thinking of-- or seeing-- the Reverend Clare Fergusson. The results are mixed, and Van Alstyne often behaves like a bear that's been poked with a sharp stick once too often. But when dead bodies start turning up that have ties to the local migrant community, Van Alstyne learns that his own sister as well as Reverend Clare also have ties to the migrant workers. As spring turns to summer, this weary police officer has his hands full with a rookie, the search for a possible serial killer, would-be lovers, media hysteria-- and a whole lot more.

After having avoided this series for so long due to the massive hype the very first book received, I now have the extremely pleasant task of playing catch-up. After so much avoidance, Julia Spencer-Fleming's series is now one of my favorites, and it has everything to do with the main characters, Russ Van Alstyne and Clare Fergusson. In showing how two very moral people try so hard always to do the right thing yet find themselves sliding down the slippery slope, the author shows readers that no one is exempt from temptation, and that-- even though it's not easy-- people still need to do what's right.

One of the ways she shows that doing what's right is sometimes not easy at all is the predicament in which Van Alstyne's sister finds herself embroiled. She and her husband are dairy farmers and have increased both the size of their land and the size of their herds. The only help they can afford are migrant workers, and they want legal workers with all their paperwork in order. Spencer-Fleming's handling of this entire subplot is sensitively done and well told.

As a matter of fact, quite a bit of the action in I Shall Not Want involves people who are trying their utmost to better themselves and their families-- and not finding it at all easy. Hadley Knox is a prime example of this. She's had a hard life dealing with a succession of low-paying jobs and an abusive husband. Now she and her children are back in Millers Kill, and she's the rookie cop. Hadley took the job not so much because she thought she would make a good police officer but because she desperately needs the money for her children.

Spencer-Fleming knows how to stretch readers' nerves to the breaking point with tense situations; she knows how to make readers' eyes well up with tears; and she also knows how to defuse tension with well-placed (and laugh-out-loud funny) bits of humor. All this is evident in I Shall Not Want. She also did something else that I felt was brilliant. The book begins with Hadley Knox, the rookie, involved in a shoot-out. We see the entire scene through her inexperienced and terrified eyes. At the end of the book, we're taken back to this very same scene, this time from the point of view of the veteran cop, Russ Van Alstyne. It's an amazing piece of writing that I will remember for a long time.

I have two more to go before I'm caught up with this series. After closing the book on this one, I immediately wanted to pick up the next, but I will restrain myself. Better to pace these gems out at intervals rather than gulp them all down at once.