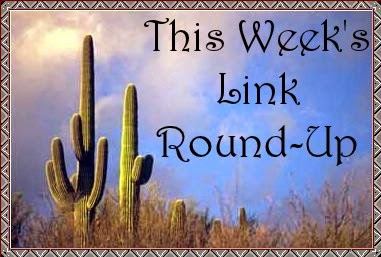 You're probably wondering how on earth a drainage ditch figures into this week's link round-up. Did I fall in one? Did someone dig one along my property line? Did I find treasure in one? No to all of the aforementioned. This weekend I spent two afternoons out in the pool during high winds, and I think I inhaled every speck of dirt and pollen that was in the air. Now all that lovely soup is draining down the back of my throat, and I feel awful. In fact, I'd much rather be laying across the bed with a good book (an ARC of A.D. Scott's The Low Road, as a matter of fact).

Just let me throw a rope on these here links and tie 'em down good, and then I'll be outta here! (I swear... I haven't been reading any Holmes on the Range mysteries...yet!)


That's all for this week. Don't forget to stop by next Friday when I'll have a freshly selected batch of links for your surfing pleasure. Have a great weekend!