A Paris Apartment by Michelle Gable 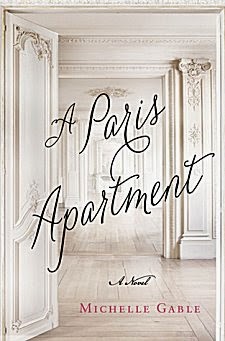 First Line: She only wanted to get out of town.


April Vogt's boss at Sotheby's makes her day. When he tells his continental furniture expert about an apartment in Paris's ninth arrondissement that has been discovered after having been untouched for seventy years, April can't wait to get over there to take a look at the treasures the apartment may contain. It also helps that she needs distance from her philandering husband.

Once in Paris, April quickly learns that the apartment is a gold mine; not only for its furniture and other priceless objects, but for the letters and journals she finds that were written by the very same woman in the breathtaking (and previously unknown) Boldini portrait in the salon. Soon April's days are filled with furniture appraisals and reading about the life of one of Paris's celebrated Belle Epoque courtesans. The more she learns about the courtesan's life, the more she examines her own life-- until she realizes she must stop ignoring her problems if she wants her own happy ending.

I'd been following news articles about an apartment in Paris that had been discovered only after the rent stopped being paid. When the doors to the residence were opened, it was learned that these rooms had been untouched for seventy years-- and were a veritable treasure trove of antiques and ephemera (like the dozens and dozens of calling cards that the author used to put together a sort of cast of characters for this book). When I learned that Michelle Gable had written a book using this very same apartment at its heart, I couldn't wait to read it.

The segments describing many of the items found in the apartment sparkled and made me feel as though I were present at some wonderful archaeological discovery. Equally strong was the story line involving the courtesan who owned the apartment and wrote the letters and journals found by the appraiser. Marthe de Florian is a fully fleshed figure, one that a reader can empathize with and even condemn on occasion.

The story line that really didn't hold up its end was the modern one of April Vogt. She's pursued by a Parisian lawyer while doing her best to avoid her husband, who once cheated on her. Granted, there's not much new and exciting in a tale like that, but I didn't mind it. What I did mind was April's character. She has every appearance of traveling through her life with blinders on... as though she believes there's only one side to every story. Her willful blindness soon began to annoy me, which meant that I took respite in Marthe de Florian's story. And how wonderful it is that there's so much more to this book than April!

Fiction, Standalone
Rating: B
Source: Purchased at The Poisoned Pen