The Secret Rooms by Catherine Bailey 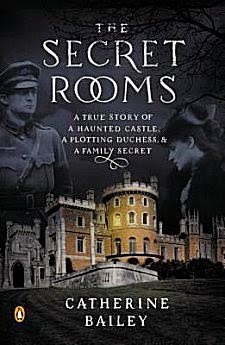 First Line: Two doctors were already at the castle; a third, Lord Dawson, Physician to King George VI, was expected.

Catherine Bailey was the very first historian given access to the rooms of the ninth Duke of Rutland, one of the wealthiest men in Britain who died alone in a cramped room in the servants' quarters of Belvoir Castle in 1940. The rooms had been sealed shortly after his death and went untouched for sixty years. It was Bailey's intent to write a book about how the Rutlands were involved in World War I,  but as she began digging through hundreds of file boxes of correspondence and dozens of ledger books, Bailey swiftly discovered that the ninth duke (who'd spent the last years of his life feverishly cataloging this wealth of historical data) had very carefully excised all mentions of three periods of his life from the historical record.

Since the lengthiest excision occurred during the first year of World War I, this meant Bailey could no longer write the book she had envisioned, but she was intrigued. What on earth happened that made the Duke feel that such actions were necessary? Bailey had a new focus for her book, and for the most part, it is a fascinating tale to read.

Catherine Bailey kept me glued to the page throughout two-thirds of this book. When she first entered the Muniment Rooms of Belvoir Castle, I was flabbergasted as she began telling of all the historical documents the ninth duke had amassed, and how he had organized and cataloged them. The discovery of the three missing periods during his life led to a fascinating recounting of how she managed to fill in the blanks. Touted as a book for fans of "Downton Abbey," I would not disagree because The Secret Rooms tells much of aristocratic life in Britain before and during the First World War. But this book is more than an historical accounting of a great family; it has much to share of a psychological nature as Bailey exposes secrets the family wanted to remain hidden. (The ninth duke was so successful that the current duke had no clue of what the author discovered.)

It's not my place to divulge what those secrets were, but in the unveiling of the one involving the first year of the war, I felt the author went off the rails a bit. Once the reader knows what was hidden, why, and who was responsible, Bailey goes into minute detail over each fact that she discovered and how it was discovered. Instead of making me feel outrage and sorrow at what was done, I soon became impatient and my enthusiasm for the book as a whole began to wane from its original high. Two-thirds of The Secret Rooms is fascinating,and I'm glad I read it, but that final third does drag a bit.

Non-Fiction, History
Rating: B
Source: Purchased at The Poisoned Pen