Any Other Name by Craig Johnson 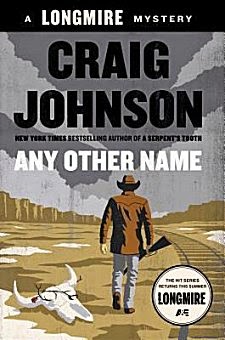 Sheriff Walt Longmire is on the verge of becoming a grandfather. If there's anything he should be doing, it's getting on a plane and heading for Philadelphia. Instead wily former sheriff Lucian Connally has asked for his help in finding out what drove Lucian's old friend, Detective Gerald Holman, to commit suicide. With ever more exasperated phone calls from his daughter, the clock is ticking, and Walt has to work fast. He doesn't want to be late for a very important date.

With the third season of A&E's Longmire set to premier in June, it's the perfect time for old fans and new to settle down with the newest Walt Longmire mystery-- and this one certainly doesn't disappoint. Craig Johnson has created one of the strongest ensemble casts in all of fiction, and in Any Other Name each character gets a turn in the spotlight.

Lucian owes the dead detective a debt, so he takes Walt into a neighboring county to talk with the man's widow, who simply cannot believe that her husband committed suicide. Lucian has some sage advice for the grieving woman:

"I want to warn you that if you put Walt on this you're going to find out what it's all about, one way or the other.... You're sure you want that? Because he's like a gun; once you point him and pull the trigger, it's too late to change your mind."


And that's one of the main things readers love about Walt Longmire: he's not going to quit, no matter what happens, no matter what it takes. If you're in trouble, he's going to come save your bacon. As Walt begins to dig into the case, he finds that Holman was looking into the disappearances of three women in Campbell County, and the trail leads to the tiny, rundown town of Arrosa. What's been going on in Arrosa and in Campbell County is a dark tale, but Walt is the stuff of legend in Wyoming as one of the Campbell County deputies tells us: "As soon as a cop gets killed in this state, all the old-timers say we need to bring in Walt Longmire."

However, this book isn't all about the case. During the investigation, readers are treated to a few facts about Wyoming and other subjects-- and pay attention, folks. These tidbits aren't just thrown in for your education, they're going to mean something further on down the line. That's one of the beauties of Craig Johnson's writing. It all seems so effortless and flows so smoothly that it's only after you finish reading the book that you can pick apart the pieces and see how closely Johnson fits them all together.

As always, Walt's self-deprecating humor plays a role in the story, and his support team of Vic Moretti, Henry Standing Bear, Lucian Connally, Virgil White Buffalo, and Dog all add their parts. Johnson's the type of writer who can write action so tense your hair can stand on end, then within seconds you'll either be laughing your head off or having a tear run down your cheek. His books get a hold of you and won't turn you loose until you've turned that last page, so if you're new to the books, consider yourself warned.

If the television series is all you know about Sheriff Walt Longmire, and you're wondering if you should bother reading the books, let me tell you something: you're in for a treat. The producers of the television series have purposely not made the episodes clones of the books. This way readers who have been passionate fans of Johnson since book one (The Cold Dish) can enjoy the television series... and fans of Longmire can enjoy the books. You can jump into the series anywhere, but I wouldn't recommend it. Start with the first one. Chances are good that the second you've finished that book, you'll be gobbling up all the rest--- and Any Other Name with its humor, tenderness, two blood-curdling chase scenes, and ominous forebodings of the future is probably the best of them all.