Fatal Enquiry by Will Thomas 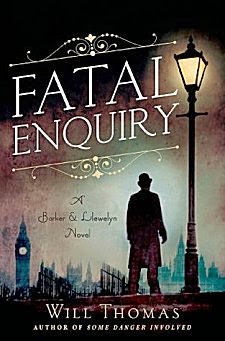 First Line: It is a truth universally acknowledged, at least among private enquiry agents, that the most momentous of cases, the real corkers, begin on the blandest, most ordinary days.

It's a slow day at the office, and Thomas Llewelyn is doing a bit of daydreaming when his boss, Cyrus Barker, receives a warning message that turns their lives upside down. Several years previously, Barker sent a particularly nasty aristocratic sociopath, Sebastian Nightwine, fleeing as far from the law as he could. Now Nightwine is back, under the protection of the British government and given immunity from his past crimes. Barker and Llewelyn have to uncover Nightwine's latest schemes, but the villain is looking for payback. It is a job that has the two enquiry agents trying to do their work while hiding to save their own lives and those of their friends.

It's been a very long six years since the last book in this marvelous historical mystery series, and I was thrilled when I learned of Fatal Enquiry. Barker and Llewelyn are two of my favorite characters, a sort of Victorian Era John Ceepak and Danny Boyle (wonderful characters created by Chris Grabenstein). More of Cyrus Barker's mysterious past is unveiled in this book, and although young Thomas Llewelyn is still a bit naive-- and still has an eye for the pretty girls-- he gets the chance to have some control over the investigation this time around. Has he learned anything? That's up to you to find out.

Author Will Thomas certainly hasn't lost his ability to bring Victorian London to life with its various ethnic neighborhoods and colorful characters. Following Barker and Llewelyn through these mean streets is a feast for the eyes, the ears, and the nose. If you enjoy books with atmosphere, look no further.

Nightwine's schemes are just the sort of magic that overconfident government officials would line up for, and it was a treat to watch Barker and Llewelyn dodge Scotland Yard, informants, and paid assassins in order to learn what the man was up to-- and to come up with a plan to stop him.

Characters, atmosphere, action, and humor. I was so pleased to be back in Barker and Llewelyn's London, and I think you'd enjoy spending some time there as well. Although it would be better to start at the beginning of the series to get all the nuances of the characters and their relationships, it's not necessary. Fatal Enquiry stands alone very well. Now that I've read the latest adventure of these private enquiry agents, my only question is-- when's the next one?