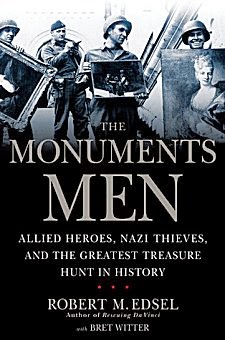 First Line: This is a long road we have to travel.

While living in Florence, Italy, author Robert M. Edsel wondered how so many brilliant works of art could have survived the cataclysm that was World War II. What he discovered was the MFAA-- the Monuments, Fine Arts, and Archives program-- a group of dedicated museum curators, artists, art restorers, art historians, and soldiers who risked their lives to save hundreds of years worth of European culture. Rightfully overshadowed by the horrors of Nazi concentration camps, the work these men and women did-- often with no weapons, no transportation, and no cameras or film-- has now come to light.

Like many readers, I came to The Monuments Men first through the film starring George Clooney. Although I did enjoy it, I couldn't get over the feeling that most of the story had been left untold. The Nazis stole millions of pieces of art and either kept them for themselves, destroyed them, or placed them in caches for Hitler's master plan art museum (which, thankfully, was never built). I had to learn more; thus, I turned to Edsel's book.

Edsel covers the period of time from D-Day to V-E Day in northwestern Europe. (In a second book, Saving Italy, the author covers MFAA efforts in that country; there's simply too much story to tell in one book.) The first third of the book is rather disjointed as Edsel jumps from location to location, relating the difficulties of implementing the MFAA objectives (which were backed by Eisenhower), introducing the Monuments Men, and explaining the scope of Nazi plundering. I was so fascinated by the subject matter that this choppiness scarcely phased me.

Once the stage has been set and the Allies fight their way out of France and Belgium, the book picks up speed, and the action does take on the appearance of a treasure hunt. When the Allies reach Germany, they discover that it's a race against the Russians to find over 1,000 caches tucked away mainly in the southern part of the country. Whereas the Allies are working to return the recovered art to its rightful owners, the Russians-- who have suffered horrendously at the hands of the Nazis-- will keep everything they find as war reparations.

I found this book to be fascinating on so many counts: the fact that people actually recognized the need to save their culture, the men and women of the MFAA who worked so hard under extreme circumstances (many of whom never spoke of what they did once the war was over), and yet more examples of Nazi rapaciousness. This is a topic that has importance today. Hundreds of thousands of works of art are still missing, and any online news source will provide recent stories of artwork stolen by the Nazis being uncovered. Edsel's book is fascinating reading for anyone interested in World War II or in art, and I fully intend to read more.