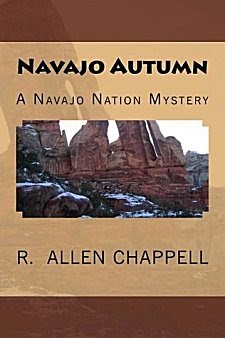 First Line: Just outside Farmington, New Mexico, the San Juan River swings in close to the highway to pick up a tributary at the mouth of a wide, nearly dry, streambed-- La Plata, it's called-- not much more than a trickle usually, though it can be more if they get any rain up-country.

When the body of BIA investigator Patsy Greyhorse is found under the La Plata Bridge, law enforcement believes they have an open-and-shut case. Right next to Patsy they found Thomas Begay, a well-known drunk, who-- from all appearances-- is sleeping off a bender of a murder. But the police underestimate the groggy Navajo, and Thomas manages to escape. What he needs right now is a friend who's capable of helping him out of this mess, and that friend is Charlie Yazzie, fresh from law school and itching to bust out of his bottom-rung reservation job.

With the deserved success of Tony Hillerman's Leaphorn and Chee mysteries, other aspiring authors hustled to find their own place in this new niche. Some were good, many were not. What always makes the difference in this or any other subgenre of crime fiction is the writer's storytelling ability and his knowledge of his setting and his characters. R. Allen Chappell has all this in abundance.

Chappell grew up with the Navajo, went to school with them, worked with them, and built enduring friendships along the way. It shows. He knows the landscape. You're not going to find any of his characters jumping on the interstate outside of Kayenta as I did in a book I read a few months ago. (People unfamiliar with the area can see the glaring error by looking at a map. Those who have been there will roll their eyes, laugh, and keep an eye out for the next mistake.) Most of the action in Navajo Autumn takes place out in the back country of the Four Corners area. It's a land with plenty of nowhere, a land that few people will enter to find someone unless they know the area well themselves.

In addition to his lyrical description of the landscape, Chappell excels in his straight-shooting depiction of the Navajo people, their customs, their beliefs, and their way of life in this remote area. The setting and the cultural aspects of this novel alone are well worth the price of admission.

This first novel (and first mystery) does have a couple of problems. The characterizations of Charlie and Thomas can be a bit inconsistent. Charlie is first seen as a young man totally focused on his career-- in this behavior more white than Navajo. Then he rapidly changes into an altruistic soul willing to risk life and career to help his friend. I have a feeling that this was meant to to show how being in the back country amongst his people brings him closer to the values and traditions he grew up with, but the change was abrupt and a bit jarring. Thomas, too, once he's out in the back country, quickly changes from a full-blown alcoholic to someone who doesn't seem to notice that he hasn't had a drink in days.

Patsy Greyhorse's murder took a backseat for much of the book, and I feel that if her investigation and a few government machinations had been woven throughout the story more, Navajo Autumn would have been even more suspenseful and engaging. As I said earlier though, this is a first book and a first mystery, and the things I brought up can be easily fixed. What's important is that this author kept me engrossed in his story throughout, and he left me wanting more of Charlie Yazzie and Thomas Begay. I'm really looking forward to his next book, Boy Made of Dawn.