Murder in Pigalle by Cara Black 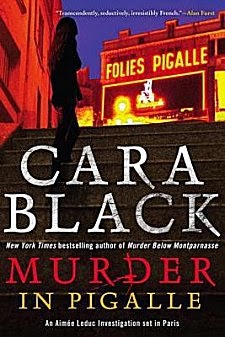 First Line: Stepping into the shadowed cool of Passage Verdeau, Aimée Leduc welcomed the reprieve from the late-June heat-- but not the barrel of the Uzi blocking her way.

June, 1998 is not the best time in the world to be five months pregnant: French football fans are in riot mode anticipating the World Cup, the sticky heat is oppressive, and a serial rapist is targeting teenage girls in Paris's Pigalle district. Private investigator Aimée Leduc is trying to focus on her unborn child, but when Zazie the 13-year-old daughter of the proprietor of Aimée's favorite café disappears, everything changes in a heartbeat. The police aren't taking Zazie's disappearance seriously enough, and her parents are asking Aimée for help. She couldn't say no... even if she wanted to.

There's a lot in Murder in Pigalle for a reader to digest, especially Aimée's own reactions to her pregnancy. How is she coping with morning sickness, getting tired easily, and her clothes no longer fitting properly? How are her friends and business associates reacting to the news? This is all important, especially for future books in the series, but front and center is Zazie's disappearance with this serial rapist on the prowl. Aimée knows how important time is in relationship to the young girl's survival, and her sense of urgency swiftly becomes the focus of the reader. As Aimée fights nausea, exhaustion, and an almost overwhelming sense of panic, I, too, became panicked-- and I couldn't read fast enough.

As her investigation progresses, it soon becomes clear that this is not a simple case of one young girl's disappearance. There are more things at stake here, and Aimée must unravel a tangled skein of clues in order to make sense of it all and save Zazie. Of all the books in this series that I've read, Murder in Pigalle is the strongest. I can't wait to see what Cara Black has in store for us next.