Pearls and Poison by Duffy Brown 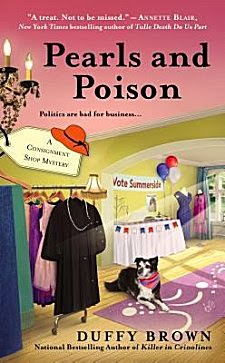 First Line: "People are going to hate me if I do this," I said to Auntie KiKi.

Reagan Summerside would much rather work in her consignment shop, the Prissy Fox; she's got bills to pay. Instead, she finds herself being roped into campaign duties since her mother is running for city alderman. However, when her mother's opponent is murdered and Gloria Summerside is Suspect #1, Reagan puts aside both campaign and consignments and appoints herself the lead investigator in this murder case. She's got her mamma's name to clear.

The further Duffy Brown's Consignment Shop series goes, the more I like it. The setting and the characters are really coming into their own. Brown blazes a mysterious trail indeed, and lays enough red herrings along the way that even Reagan's hot dog-centric mutt, Bruce Willis, would be led astray.

The cast of characters is a strong one, all the way from sassy and stubborn Reagan to her nemesis (and romantic interest) Walker Boone to two elderly sisters who are professional mourners... all the way to Reagan's strait-laced mother (who's a judge known as Guillotine Gloria) and flaky Aunt KiKi, who was a roadie for Cher. These characters are growing and changing, and in each book we learn things about them that alters our perceptions.

There's also plenty of delightful Southern sass and humor, and as Reagan follows leads, we're treated to plenty of the beautiful city of Savannah, Georgia, along the way. Come to think of it, I must be getting hooked on this series because I worry about Reagan not being able to pay her bills. Not only that, I'm thinking that she really should get herself a less conspicuous handbag if she's going to take it along on her investigations! You can't go wrong when you spend an afternoon or two with Reagan and the gang.