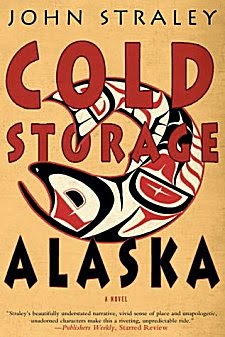 First Line: Annabelle had put the tea kettle on just moments ago.

Cold Storage, Alaska, a remote fishing village founded by Norse fishermen in 1935, last had a surge of prosperity during the frozen fish boom. Now the plant is almost completely abandoned, and the town is dying. It still means a great deal to its remaining inhabitants, however.

After serving in the military, Miles McCahon has been tending the aches and pains of not only his ailing mother but of the rest of the community. His life is about to be set on its ear for his brother Clive has returned home after a seven-year stint in prison for dealing cocaine. Clive's old business partner is hot on his heels, a by-the-book State Trooper is lurking in the shadows just waiting for Clive to blink too many times, but he can handle all that. What he doesn't think he can handle is the fact that animals have started talking to him. It remains to be seen if Clive's return is the infusion of energy Cold Storage needs, or if he'll be sounding the village's death knell.

Told in a spare poetic style that takes command of your imagination, Cold Storage, Alaska is by turns funny, serious, frightening, philosophical, exaggerated... and intimate. It is filled with odd situations and the kind of offbeat characters that keep your attention glued to the page. As you read about ugly dogs, kayaking to see the Dalai Lama, bringing an old bar back to life, and greedy drug dealers, you slowly come to understand that this book is all about love-- that love has the power to bring together, to heal, to forgive-- and watching all these disparate characters let down their defenses is quite profound.  Crimes may be talked about in the pages of this book, but that's not its focus, and that makes Cold Storage, Alaska one very special read.