The Fixer by T.E. Woods 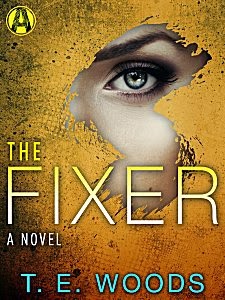 First Line: The prospect sat in the hot tub, fat and doughy.

There's a person to contact when you want something fixed. Fixed permanently, that is. If you meet this person's criteria-- and if she sees that justice will be served in no other way-- your problem will be handled with skill and precision. Since she carries out no more than one job per country per year, she takes care not to be caught. You don't want to mess with The Fixer.

When a beautiful young woman comes to the office of a clinical psychologist in Olympia, Washington, it takes a concerted effort by the doctor to work past her defences, especially after she's admitted that she's hurt many people. As the woman reaches out to the doctor more frequently, the doctor feels obligated to contact the police. At the same time, a Seattle homicide detective gets a call from his journalist son who wants his father's help following the trail of a killer. These paths are converging, and it's anyone's guess as to what will happen next.

I was interested in reading a book from the Random House Alibi eBook imprint, and after turning the last page on The Fixer, I have to say that I'm very pleased.  Author T.E. Woods proves quite skilled at turning the usual thriller formula on its head to create something with nuanced characters, expert plotting, and enough twists and turns to satisfy most adrenaline junkies.

In doing a bit of research, I've seen this book listed as both the first of the "Justice" novels and as the first in the Mort Grant (the Seattle cop) series, which brings up one of the points I wanted to make about the book. The first part of The Fixer deals with the psychologist and the patient, and while the reader is busy trying to figure out the identity of the assassin, Mort Grant quietly slips into the action. Part of me wants to protest the fact that the women couldn't bail themselves out of the situation they'd gotten themselves into, but without going deeper into the story and possibly spoiling the plot for future readers, I can understand why Woods decided to do what she did. Besides, Mort Grant is such an interesting character that I definitely want to see more of him.

I also thought that several of the clues the author set out for readers to find were too easy to spot even through the misdirection, but then I got hooked on it. How sure was I that I was on the right track? If you're an indecisive sort of reader, you just might get a bit dizzy in the midst of The Fixer.

Throughout the story, I had the feeling that I had just opened the door to something very special. I really look forward to more books by T.E. Woods.