The Ottoman Cage by Barbara Nadel 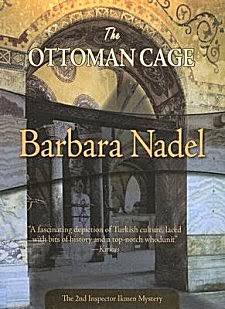 First Line: The old woman looked sadly up at the open door and sighed.

Istanbul's brandy- and nicotine-loving Inspector Çetin Ikmen has what should be an open-and-shut case. A young man is dead. Needle tracks and other signs point to drug abuse. There are rumors of prostitution, and a local family has reported a missing son. But nothing is as simple as it should be. Conflicting statements describing the owner of the apartment where the young man was found agree on two things: he wears a large, flashy ring, and he "looks Armenian."  Before Ikmen has the answers he needs, he's going to have to deal with the lingering residue of a hundred-year-old genocide and an even older legacy that dates all the way back to the Ottoman Empire at its height.

Two years ago, the first book in this series, Belshazzar's Daughter, was one of the best books I read. I've taken entirely too long to get back to this series, and I picked up The Ottoman Cage with a great deal  of anticipation. I enjoyed watching the wily Inspector Ikmen at work, but at times it felt as though there was too much going on for one book.

The book felt too long and moved as slowly as molasses in January throughout the murder investigation. It revealed itself much too slowly, undoubtedly due more to modern attitudes in Turkey toward the Armenian genocide than to its ties to the customs of the old Ottoman Empire. The murderer's identity was very clear to me early on, and as the investigation dragged on, I found myself becoming impatient.

There is also a lot of Ikmen's personal life in this book, but I did not find these parts intrusive at all. Quite the contrary, they illuminated the inspector's character and revealed elements of his personality that prove he isn't always as charming as he was in the first book. Ikmen, married and with nine children, has his elderly father living with them. Timür (and the entire family for that matter) is suffering from his advanced dementia. It's particularly difficult for Ikmen's wife, Fatma, who has debilitating health problems of her own. Nadel does an excellent job showing us not only how these two problems tear at the fabric of the family, but how Ikmen's coping mechanisms have a profound effect as well.

Although the pace dragged and I became impatient from time to time, I'm glad that I read the book. Nadel has created a marvelous character in Çetin Ikmen, and she brings Istanbul and the country of Turkey to life. I'm looking forward to book number three.