The Case of the Love Commandos by Tarquin Hall 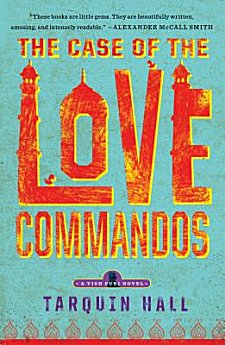 First Line: The Love Commando watched the black Range Rover pull in through the gates of the University of Agra.

Tulsi's family is dead set against her boyfriend. Tulsi is from a high-caste family, while Ram, the young man she loves, is one of the Untouchables-- the lowest rung of Indian society. When Tulsi's father locks her in her room and promises to find and kill Ram, the young couple reaches out to the Love Commandos. The Love Commandos, a real-life group of volunteers committed to helping mixed-caste couples, rescue Tulsi, but Ram has gone missing.

Private investigator Vish Puri now has the task of finding Ram, and it's a case he doesn't want. Puri is definitely going through a bad patch. His wallet has been stolen, he's failed to recover money stolen from the First National Bank of Punjab, he's supposed to go on pilgrimage with his family, and-- worst of all-- his arch rival is also trying to find the missing boy. India's Most Private Investigator knows that his team of assistants will have to infiltrate Ram's village and negotiate caste politics if this case is to be solved.

This fourth book in the splendid series by Tarquin Hall feels a bit disjointed compared to the other three, but it hardly seems worth mentioning. The main reason for the story being "out of joint" is the fact that readers get to learn more about Vish Puri's assistants. Instead of being secretive creatures referred to as "Facecream" and "Tubelight," we get to see some of the things they do when they're not investigating a case for Puri. While we learn about them, we learn about the very real prejudices concerning mixed-caste marriages in India.

Once again, Puri's mother gets to do a bit of her own investigating while on pilgrimage with the rest of her family. This is Mummy-ji's chance to shine and provide readers with the gentle humor and insight into modern life in India that all devotees of this series look forward to.

The mystery is-- as always-- a strong element in the book, but this book-- and the entire series-- is much more than the sum of its parts. The cast of vivid characters, the humor, the intriguing mysteries, the mouthwatering food, the exotic sights, sounds, and smells, the pitch perfect observations of life in modern day India, the dialogue that gives the flavor of Indian speech without a wisp of incoherency... all these parts blend together into such a savory curry that Tarquin Hall's books are downright addictive. The Case of the Love Commandos is another strong entry in a series that I recommend very highly.