The Back Road by Rachel Abbott 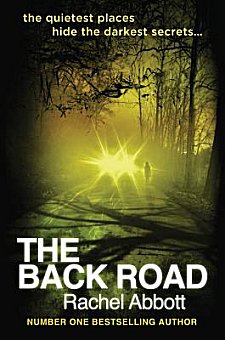 First Line: From the moment the cupboard door was slammed shut, trapping them both inside, she knew something was different.

A young girl is hit by a car and left for dead on a back road outside Little Melham, sending shock waves ripping through the village. What really happened that night puts nurse Ellie Saunders' marriage and the safety of her children in danger, and her neighbor, former detective Tom Douglas, learns that it's impossible to ignore his policeman's instincts. He's positive that what happened to that young girl was much more than an accident.

It was difficult for me to get into this story at first. The Back Road has a large cast of characters, and although I didn't have any trouble keeping them straight, I just plain didn't like any of them and almost hoped that they were all guilty of something so there would be a mass arrest and they'd be charged with something... anything. Ellie Saunders and her husband Max are living the good life: two beautiful children, plenty of money, a wonderful, newly renovated home... you get the picture. But Ellie is emotionally needy, and Max has a tendency to be an idiot. They've surrounded themselves with other bright young things of the upwardly mobile set, and all of these friends have amassed a wealth of secrets and indiscretions due to their overwhelming sense of entitlement. I was definitely having a rough time slogging through this cast. It wasn't until Ellie's sister comes for a visit and neighbor Tom Douglas enters the picture more fully that the light began to shine at the end of my tunnel.

The Back Road could stand to be tightened up a bit. It takes too long for the characters' motivations to begin coming to light. Once they do, the story comes to life, the pace quickens, and I was hooked. If you're a patient sort of reader, this could be the book for you. There's definitely a payoff at the end.