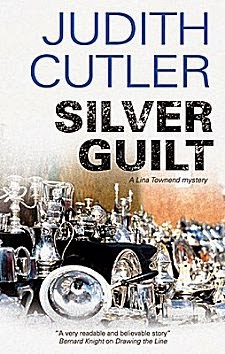 First Lines: "A television set!" Griff quavered, in a voice far older than his usual one. "My dearest Lina, why in the world would we need a television set?"

Young Lina Townend is making a name for herself, both as an antiques dealer and as a restorer, but when she agrees to help an acquaintance in her booth at a fair, Lina is accused of theft.  A handsome fellow dealer named Piers and a kind policeman from the Art Fraud division take interest in her plight. Lina and Piers begin dating, and the policeman always seems to be at hand when Lina needs help. She is going to need it. Valuable silver is going missing at the stately home where her disreputable father, Lord Elham, lives, and-- if Lina thinks without the aid of her hormones-- Piers may not be the knight in shining armor she first believed him to be. There's only one person Lina can trust: her wise old mentor Griff, but when violence threatens him, it's time to take care of business... her own way.

I've fallen for Lina Townend. Author Judith Cutler has created a flawed and charming young woman that I would love to mother, and that's something to write home about, since my maternal instincts normally only kick in with the furred and feathered. Passed around from one foster home to another "like a parcel" as she puts it, Lina is fighting against low self esteem and a tendency to self harm. A miracle occurred when she and Griff, an older gay man met. Griff took the time to see how valuable this young woman is, and he's taken her under his wing. He's teaching her everything he knows about dealing in and restoring antiques. He's working with her to better herself and to increase her vocabulary, and he's definitely working on Lina's low opinion of herself. Under his care, Lina is beginning to blossom, and it truly is wonderful to see.

The book is written in Lina's voice, and I can find myself engrossed in her investigation of the mystery, laughing at her turn of phrase, or wanting to wrap her up in a big hug. Watching the policeman slowly realize what a treasure she is is worth reading the entire book, but there's much more to Silver Guilt than that. Lina is the illegitimate daughter of the totally eccentric and almost completely batty Lord Elham who's given over his stately mansion to a trust to run, provided that he gets to live in one wing of the house. And if you won't tell anyone that he squirreled away loads of priceless antiques from the rest of the house into his wing, I won't either.

As you can see, I love the characters-- which isn't all that unusual for me when reading a book written by Judith Cutler-- but the mystery is top notch as well. In trying to deduce what's happening to the silver pieces disappearing from Elham's house to trying to keep an eye on Lina's new boyfriend, there's plenty of skullduggery going on... and more than a few pearls of wisdom about antiques to be found, too. If you love antiques, intriguing mysteries, and excellent characterization, I'd love for you to meet Lina Townend.