The A to Z Bookish Survey 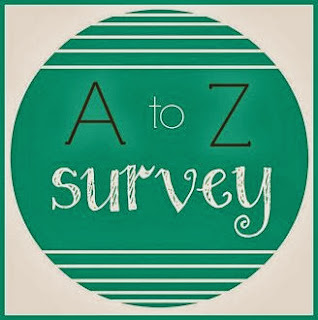 There's been a fun survey making the rounds, and after seeing Cath's answers on her excellent blog, Read Warbler, I thought I'd play along, too. Some of the answers aren't going to be easy for me to come up with, but I'll do my best!


Author you've read the most books from: Hmmm... It's got to be a toss-up between an author from my childhood-- Thornton W. Burgess-- and my favorite historical fiction author, Cynthia Harrod-Eagles. The first shows you that I've had my love of critters from a very early age, and the second shows that I'm an Anglophile with a love of multi-generational sagas.

Best Sequel Ever: God, what a question for someone whose reading consists mostly of series! I'm only on the second question, and I already feel a headache stomping in on anvil feet. Two spring to mind: J.K. Rowling's Harry Potter and the Chamber of Secrets and Diana Gabaldon's Dragonfly in Amber. I think the main reason why they sprang to mind is that they both continued the absolute magic I felt in the first books in their series.

Currently Reading: I usually have two books going at a time, one physical and one digital. Today is no exception. I'm reading The Singapore School of Villainy by Shamini Flint and Lowcountry Boil by Susan M. Boyer. Both are so good that I'm having a difficult time putting one down to read the other!

Drink of Choice While Reading: No set favorite. Today, it was Lipton's Green Tea with Honey and Ginseng.

eReader or Physical Book? I will always be biased towards physical books, probably because I grew  up in the stacks of our village library, but I also love the convenience of my eReader. (Try packing enough physical books for a month-long holiday!)

Fictional Character You Probably Would Have Actually Dated in High School: Other than the drink question, I can't seem to narrow my answers to one! When I actually attended high school, I might've said something like Frank or Joe Hardy, but my heart would really belong to Craig Johnson's Walt Longmire.

Glad you gave this book a chance: The Coroner's Lunch by Colin Cotterill. Who knew I'd fall in love with a septuagenarian coroner in 1970s Communist Laos? Ooh, after what I said about Walt, you're going to think I'm fickle!

Hidden Gem Book: These Is My Words: The Diary of Sarah Agnes Prine, 1881-1901 by Nancy E. Turner. I was blown away by this quiet little book about a pioneer woman in Arizona, which was based on the author's own family. It's been one of the books I've recommended most since the day I turned its last page.

Important Moment in Your Reading Life: When I read John Steinbeck's East of Eden in high school. It just happened to be the right book to read at an emotional turning point in my life, and it also hammered home just how powerful words can  be.

Just Finished: The last book I closed was actually a Did-Not-Finish. Anna Jansson's Killer's Island. So many plot threads heading in all directions... a bit like a yarn bomb, unfortunately... and I just didn't have the patience for it.

Kinds of Books You Won't Read: Self-Help, Romance, Urban Fantasy. There are always exceptions, but the exceptions are extremely rare in these categories.

Longest Book You've Read: I've read quite a few that are over 1,000 pages-- Stephen King's The Stand, It, and Under the Dome. Leo Tolstoy's War and Peace. And about two-thirds of Marcel Proust's À la recherche du temps perdu (in French-- when I first started college, I was a French major). James Michener's Centennial and The Covenant. I have to admit that I'm not as quick on the draw to pick up a doorstop these days!

Major Book Hangover Because of: Most recently, Laurie R. King's The Beekeeper's Apprentice. She drew me completely into the world she created.

Number of Bookcases You Own: 26

One book you have read multiple times: Thanks for making me limit my response to one-- although I'm not a great re-reader at all. Charlotte Brontë's Jane Eyre.

Preferred Place to Read: Sitting in the shade close to the waterfall in my swimming pool. Now if only I could afford to have the pool heated!

Quote that Inspires You/ Gives You All the Feels from a Book You've Read: It's a line of poetry by Leonard Cohen that Louise Penny uses in How the Light Gets In: "Ring the bells that still can ring, Forget your perfect offering, There's a crack in everything. That's how the light gets in."

Reading Regret: None really. Other than the fact that I can't read as fast or as much as I'd like. No one can, so there's no sense in regretting it.

Series You Started and Need to Finish:  [Insert gales of insane laughter here.] Please. My epitaph will read: "Here Lies Cathy. She started reading 2,142 series. She finished 98 of them."

Three of Your All-Time Favorite Books: Land of the Firebird by Suzanne Massie, Bruno Chief of Police by Martin Walker, and Edith Wharton: A Biography by R.W.B. Lewis. Ask me tomorrow, and I'll give you three completely different titles.

Unapologetic Fangirl for: Craig Johnson. Have been since I read his first book. Heck, I've already admitted I would've dated his character, Walt Longmire, in high school!

Very Excited for This Release More Than All the Others: Perhaps receiving advanced reader's copies of many of the books I anticipate has taken much of the bloom off releases? I don't know. I do know that I am looking forward to the next Julia Spencer-Fleming book, Through the Evil Days, because I'll be meeting her at The Poisoned Pen and getting my copy signed by her.

Worst Bookish Habit: Reading much, much faster than I write reviews!

X Marks the Spot... Start at the top left of your shelf and pick the 27th book: I have 26 bookcases. Which shelf?!?  [Cue Jeopardy music....] The Penguin Dictionary of Saints-- a handy little reference book, especially when you read books set in medieval Europe.

Your Latest Book Purchase: I'm reading it-- The Singapore School of Villainy by Shamini Flint that I picked up as a "scratch and dent" copy from Book Outlet. As usual, I don't see a scratch or a dent on the book. Anywhere.

ZZZ- Snatcher Book (last book that kept you up WAY late): I have more opportunity to read than most people, so I really don't find myself staying up late. However, there have been a few books that I stayed out in the pool much, much longer than normal to finish reading, and I had the pruned toes to prove it!

Email ThisBlogThis!Share to TwitterShare to FacebookShare to Pinterest
Labels: Get to Know the Blogger, Just For Giggles