@ The Poisoned Pen with Anne Hillerman! 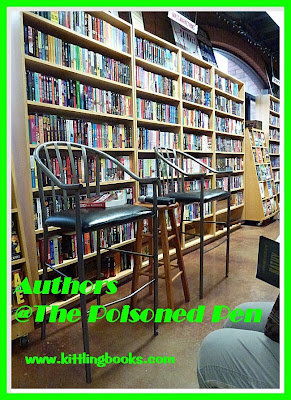 The crowd began gathering early last Wednesday for The Poisoned Pen's event for Anne Hillerman. Fortunately I had anticipated this, so I had plenty of time to observe human nature while the bookstore filled to capacity.

Next year is The Poisoned Pen Bookstore's twenty-fifth anniversary, and there are many special events planned. One of the things being done now is to make a few improvements here and there. These improvements aren't all cosmetic, however. There have been repairmen crawling around in the rafters, and when it was time to ensure that the sound and video systems were ready for Livestream, it was discovered that they'd disconnected some vital cables... and failed to hook them back up again.

All this took some time to discover, so while connections were frantically being checked, double-checked and triple-checked, host Barbara Peters said with a laugh, "There are some technical difficulties, so while they're trying to get things running, I'll just sit here and you can admire my jewelry." In honor of the series begun by Tony Hillerman and continued by his daughter, Anne, Barbara was decked out in some gorgeous turquoise and silver jewelry, including a stunning squash blossom necklace that had been made for her mother.

Barbara went on to tell us that one of the perks of being a bookstore owner was the personal library she's been able to amass. "I have the entire Tony Hillerman oeuvre-- signed first editions-- and now I'll have to add a new shelf for Anne!"

Wiring and internet connections were still being tested, so Peters shared some memories she has of times spent with Tony Hillerman, one of the masters of American crime fiction. She remembered the absolutely jam-packed auditorium of the Scottsdale Public Library when Hillerman appeared to promote his memoirs, Seldom Disappointed. She was also with Hillerman for two National Book Festivals in Washington, DC-- the first festival ended on September 10, 2001, and  the third occurred during the days of the DC snipers. The dates of both significant and filled with high emotion.

Once it was decided that the sound system was beyond repair, it was time for Anne Hillerman to join us. While acknowledging that most of the standing-room-only group was at The Poisoned Pen because of her famous father, Anne smilingly said, "I am so grateful to have Tony Hillerman as a father, but this is my book!" She then went on to tell us a bit about Tony.

After suffering severe wounds during his service in World War II, Tony studied engineering on the G.I. Bill. He didn't like it much, so when he was encouraged to go into journalism, he did. It took a while, though. He and his family moved to Oklahoma where he got a job driving a truckload of pipe to the Navajo Reservation. He got to observe the Blessing Way ceremony welcoming young men home from the war-- and that was the beginning of his love affair with the Navajo.

They then moved to Santa Fe, New Mexico, where Tony got a job as a journalist. It was during this time that he and his wife adopted four of Anne's siblings. A teaching job in Albuquerque followed, and knowing that her husband wanted to focus on his writing, Tony's wife offered to get a job to supplement their income so he could follow his dream.

Albuquerque is where Joe Leaphorn and Jim Chee-- two of the best known characters in all of American crime fiction-- joined the Hillerman family. Anne well remembers all the times her parents would sit at the table and talk about Joe and Jim as though they were real.

Many readers have noticed that the series begins with Joe Leaphorn only. Then Jim Chee is introduced, and there's no Joe. It's not until the seventh book that the two characters are united for the rest of the series. There's a reason for that. Someone bought the movie rights to Joe Leaphorn. Since Tony didn't like the way things were going with that, he created a new, more traditional, Navajo character that could not be gobbled up in that movie rights deal. When the person's option lapsed, Tony could write about both characters.

When Anne and her husband, photographer Don Strel, were working on the book Tony Hillerman's Landscape: On the Road with Chee and Leaphorn, Anne reread all her father's novels, primarily for his descriptions of the landscape and his characters. She realized that Navajo Nation Police Officer Bernadette Manuelito was a character with a lot of potential. She talked about this with her father, and Tony agreed with her. Unfortunately, it wasn't meant to be that her father would write more books.

Anne's mother was her first editor. When Anne first asked her about writing a book featuring Bernie, her mother said, "I think your father would like that." Erring on the side of caution, Anne also checked with her father's publisher in New York City. When the manuscript was finished, she submitted it. The response?

That had to be music to Anne's ears!

Most of the action in Spider Woman's Daughter takes place on the Navajo Reservation, but Anne also brought her characters to Santa Fe because that's where she lives. Known more for her non-fiction writing, Anne also writes restaurant reviews, and this enabled her characters to eat some excellent food. Chaco Canyon also features in the book because Anne believed it to be "a wonderful spot for a few bodies."

After reading an excerpt from her book, Anne told us that she's already hard at work on her second. Part of the action in this second book will occur in one of my favorite spots in all the world-- Monument Valley. Shiprock and an endangered species of cactus that grows at its base will also feature.

A fan in the audience asked if Tony had ever been asked to appear in one of the movies that were based upon his books. "Yes," Anne replied. "Dad was going to be in one of them, but he kept forgetting his lines."

Rounding out the evening, Barbara Peters, who-- of course-- has read Spider Woman's Daughter, said, "You really do feel as though it's the nineteenth book in the series." Peters then went on to mention a lull between Hillerman books that evidently made the publisher nervous. During this interval, a dummy book was put together. Called Mudhead Kiva, it's a lovely cover on a book with blank pages. Advertising boards were also made up. Since Barbara Peters has a copy, she told us, "I have all twenty Hillerman novels!"

Over all too soon, as Denis and I walked out to the Jeep, I vowed to reacquaint myself with all the Hillerman books. Well... nineteen of them, anyway!