The Missing Heiress by Karen Charlton 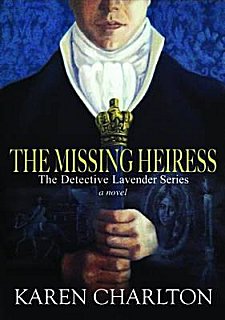 First Line: The two-wheeled hackney carriage sped down Mile End Road towards Whitechapel, weaving in and out of more sedate vehicles, farm carts and barrow boys.

Northumberland, England, November 1809. A young heiress has gone missing from her locked bedroom and is feared dead. While the townspeople are nodding and muttering about witchcraft, the local constable is baffled, and two of London's Bow Street Runners are sent for. What Detective Stephen Lavender and Constable Woods stumble into are highwaymen, gypsies, surly farmers, and siblings who don't seem to care that Helen Carnaby is missing. It's obvious that there are many secrets swirling through the corridors of Linn Hagh, the ancient pele tower where the young woman lived and from which she disappeared. What isn't so obvious is what actually happened to her.

Based on actual events uncovered by work on her family history, Karen Charlton's The Missing Heiress is an absorbing glimpse into a Regency England far from London. Detective Stephen Lavender and his partner, Constable Woods, must deal with people who dislike any sign of authority-- farmers and gypsies-- and as they delve deeper into the facts of the case, they begin to understand why. I loved the way Lavender conducted his investigation and how he pieced the clues together. The comradery and humor he and Woods share is welcome relief from their dealings with suspicious townsfolk and supercilious gentry.

Although there was little doubt as to who instigated Helen Carnaby's disappearance and why, Charlton really made me wonder just how far those people would go to get what they wanted. All in all, a most satisfactory case for the detective, although I did have one small quibble.... In a very exciting scene at the beginning of the book, Detective Lavender comes in contact with a mysterious (and very attractive) Spanish woman. Yes, she did provide a bit of mystery and romantic interest, but I found this entire subplot unnecessary and distracting. Charlton hooked me with her eery, suspenseful tale and I didn't want to be pulled away from it for a second.

Now after seeing how Lavender and Woods can solve a case, I have only one thing to say: I want more!