A Phantom Death by Annette Mahon 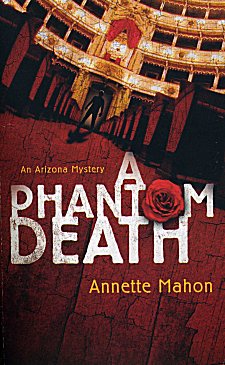 First Line: It was a glorious night, crisp and clear, with millions of tiny shards of light sparkling in the deep black of the desert sky.

Maggie Browne knew Jonathan Hunter when he was a child living close to their ranch outside Scottsdale, Arizona. Now he's an actor on tour with "Phantom of the Opera." When Jonathan is found bludgeoned to death in the desert not far from the ranch Maggie's son now owns, Maggie is in shock and shares her feelings with her beloved St. Rose Quilting Bee group.

The police are struggling to find clues, so when Jonathan's mother shows up and asks for her help, Maggie decides to do some sleuthing of her own, aided by her friends in the quilting group. Volunteering as theater ushers, Maggie and fellow quilter Victoria get to know the cast members and soon realize why the police are having problems: the suspect list is a long one filled with people who are grudging at best when it comes to coughing up the truth.

You know me-- when I hear of a mystery series set in Arizona, I have to get my hands on it. Annette Mahon's setting was a familiar one. I could picture myself traveling the streets of Scottsdale with Maggie, as well as on out into the desert where the ever present land sharks are buying up as much land as possible to turn into cookie cutter housing for the rich and not-so rich. Also easy to envision was Maggie's quilting group, which is filled with a variety of characters sure to play featured roles in future books. I liked the way quilting really played a part in events and felt as though I learned a good deal about how a quilting group works. But my enlightenment did not stop there. I also became acquainted with the theater through reading Mahon's book.

An excellent setting, the imparting of knowledge-- and a darned good cast of characters. Between Maggie's sons and their families and the "Phantom of the Opera" cast, Mahon has plenty of scope to flex her characterization muscles, and she does without getting me tangled up in names once. Maggie is a strong, intelligent, caring woman who's the heart of her family and also has a busy role in her community. She's perfect as the main character.

For some reason, I knew the identity of the murderer almost immediately. I'm not sure why because I don't think the author made it that obvious. (Perhaps I wasn't wearing my tinfoil hat as I read the book?) I enjoyed reading about this group of older (mostly retired) women solving crime on my own turf, and I look forward to reading more of their adventures.