A Great Deliverance by Elizabeth George 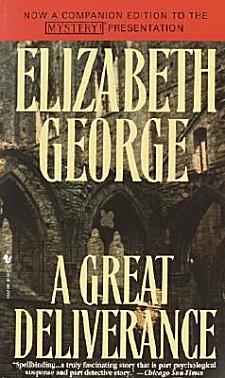 First Line: It was a solecism of the very worst kind.

A horrific murder has taken place in the small village of Keldale, in Yorkshire. Everyone who knows plain, fat, quiet Roberta Teys simply cannot believe that she took an ax to her father-- even though she's confessed. Local law enforcement needs help, so Scotland Yard sends Inspector Thomas Lynley (the eighth earl of Asherton) and Detective Sergeant Barbara Havers (most decidedly of the working class). As the mismatched pair begin to investigate, they uncover a series of scandals and crimes that are going to have repercussions, not only amongst the villagers of Keldale, but in their own lives as well.

I've watched a few episodes of "The Inspector Lynley Mysteries" produced by the BBC, and I knew that I'd have to get my hands on the books they were based on sooner or later. I'm glad I finally made the effort.

Back in the 1980s when this book was first published, I think the subject matter behind the murder was much more "new" and shocking than it is today. Perhaps that's a sad statement on today, but it did have an effect on how I felt about the story line surrounding the plot. I easily picked up on behavioral clues and the like, so I wasn't surprised. I also wasn't disappointed for two reasons: one, this story line is extremely well done, and two, there's much more to A Great Deliverance than the crime.

What wowed me about this book were the two main characters. A fellow police officer at Scotland Yard describes Detective Sergeant Barbara Havers as "a truculent pigheaded little bitch" (which is pretty close to the mark), and Havers herself describes new partner Lynley as "that sodding little fop." Havers can't seem to work with anyone. She's on the verge of being tossed out on her ear. Whatever gave her superior the idea that this stubby, combatant woman would work well with sauve, aristocratic, well-dressed Inspector Thomas Lynley was either a stroke of genius... or blind, staggering luck.

They don't work all that well together in this first book, but the glimmer is there. In any other book, handsome Inspector Lynley would be the star, and with his background and his history of relationships, he is an incredibly interesting man about whom I want to learn much more. However, Lynley is not the star of A Great Deliverance. That honor goes to a woman who's close to becoming unhinged-- plain, ill-dressed, rude, and belligerent Barbara Havers steals the show, and her story has the power to put readers through an emotional roller coaster ride.

After being drawn so deeply into this story and into the lives of these two marvelous characters, I can't wait to see how the series progresses. Once again, books win over film!