The Black Dove by Steve Hockensmith 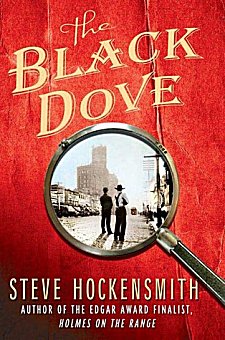 First Line: I don't know who first said, "Good things come to those who wait." I just hope it's not in the Bible, as blasphemy's hardly the best way to begin a new book.

When you're down to your last thin dime, all that talk about patience doesn't set well, and in the summer of 1893 the Amlingmeyer brothers are in San Francisco, and they're in dire need of work.

They try to become professional detectives, but the pros look down on two raggedy-looking cowboys. When a friend of theirs, Dr. Chan, turns up dead, the police call it suicide. Old Red calls that a lie and sets out to prove it. This time following in the footsteps of Old Red's hero Sherlock Holmes is going to put these two brothers right in the middle of crooked cops, Barbary Coast thugs, and deadly Chinatown tongs. Maybe Big Red better put off buying a new hat....

Steve Hockensmith seems to be visiting the various sub-genres of mysteries in this Holmes on the Range series, and even with two poorly educated cowhands as Holmes and Watson, it works beautifully. The first book in the series (Holmes on the Range) is a classic mystery with a long list of suspects. The second (On the Wrong Track) is a thriller complete with train robbers and runaway locomotives. The Black Dove is all about the tough private detective trying to unravel a mystery in Chinatown.

These stories are told from the younger Amlingmeyer brother's point of view, and he speaks pitch perfect cowboy. Whenever Big Red slips and uses vernacular that might be a bit ambiguous, he remembers that he's writing these stories for posterity and explains his meaning. Big Red is unvarnished and honest, and has quite the eye for the ladies; his narration has an immediacy and an endearing quality that just draw you right into the story. There are clues to make sense of, dangers to outrun, and-- as always-- plenty of laughter throughout.

If you like mysteries set in the Old West, you can't do any better than Steve Hockensmith's Holmes on the Range. Old Red Amlingmeyer is determined to prove that sometimes a cowboy isn't just a cowboy. Sometimes he's every bit as good as the famous Sherlock Holmes, and this adventure in San Francisco's Chinatown goes a long way to prove it.