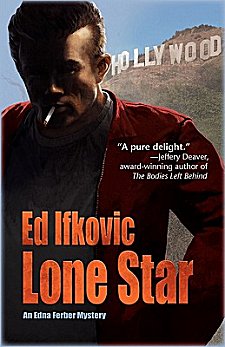 First Line: "No one flies to L.A. in July," I mumbled as the driver opened the door of the limo and helped me in.

Novelist Edna Ferber has come to Hollywood to see how director George Stevens and Warner Bros. Studio are treating her baby-- Texas oil epic Giant. The movie is in its last days of filming, and Ferber is looking forward to meeting the stars: Rock Hudson, Elizabeth Taylor, and James Dean. She finds that James Dean has gotten himself in a bit of hot water. He's accused of fathering a child with a mentally unstable extra, and the studio is afraid that any negative publicity will harm the movie's release. But there's more trouble on the horizon than a bit of bad press. The extra is murdered, and now Dean faces a murder charge. It's up to Edna and her sidekick, veteran character actress Mercedes McCambridge, to clear the young star's name.

On the face of it, Lone Star is going to appeal most to those who are interested in 1950s Hollywood with its classic films and movie stars, its secrets and scandals. I grew up with two movie buffs, and I learned a lot through osmosis. I've also read Ferber's books and watched Giant and many, many other movies of the period. With all this having been said, I still think there's a lot in Lone Star that will appeal to readers who are arriving on the scene completely clueless.

Edna Ferber makes an interesting sleuth, not always sure of herself but quick-thinking, and watching her turn into The Grande Dame when she's not being given her proper due is a treat. Mercedes McCambridge is a wonderful choice to be Ferber's sidekick. She knows everyone and knows all the ins and outs of Hollywood, so she can open many of the doors that Ferber needs to walk through. She's also got the requisite inquiring mind and free spirit.

What is perhaps the most important relationship of all is the one between Ferber and young James Dean. Reading this book is bittersweet to anyone who knows Dean's story, but there is a great deal of enjoyment to be found in watching real friendship develop between these two very unlikely people. The grand lady of letters with her nice clothes, gloves, and her pearls, and the breezy, sloppy, and often charming idol of movie magazines. Superficially they have nothing in common, but scratch below the surface and there are plenty of similarities to be found.

The author knows his Hollywood history and uses it to good effect. The cast is strong and interesting, and the reader's attention remains fixed firmly on the book because the mystery is a puzzler, too. Now that I've met Miss Edna Ferber and have seen what she's capable of, I'm looking forward to reading more of her adventures.