The Raven's Gift by Don Rearden 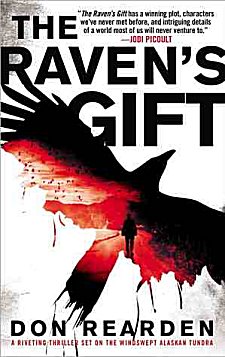 First Line: He crawled on his stomach through the snowdrift and lifted his head over the edge of the riverbank, just enough to see the first few houses, charred black and dislodged from the wood blocks and tall steel pilings meant to hold them off the tundra's permafrost.

John Morgan and his beloved wife are thrilled to be traveling to a remote Yup'ik village on the Alaskan tundra where they will be teachers. For John, it will be getting in touch with a part of his heritage and the part of him that loves hunting and wild places. More importantly, both of them feel that they can make a difference in the world.

They've barely become acclimated to their surroundings when a deadly plague strikes and everything turns to chaos. There is absolutely no help from the outside. John's only chance for survival is a thousand-mile journey across the bitterly cold, snow-covered Alaskan wilderness to get help. Along the way, he encounters a blind girl and an elderly woman. Both Yup'ik women need his protection, and John needs their knowledge of the weather and terrain for them all to survive. In a land of brutal cold, no food, and an epidemic, all three will be pushed to their limits.

The plot of this book meanders a bit, but it's perfect since it mimics the wavering path of a freezing, starving, almost hallucinating person lost in the snow. As John slowly makes his way through the unforgiving landscape, he remembers he and his wife being newcomers to the village, their learning how to teach the children, making friends, and learning the food and customs of the people they were living among. These flashes of memory occur between perilous encounters with other survivors who seem to have lost all their humanity. As the blind girl and then the old woman join him, their knowledge is invaluable to the survival of all three-- and the two women's presence very gradually brings a feeling of hope and possibility back to a man who's all but given up.

This book succeeds on so many levels. As a commentary on geography and culture, it's first-rate. As a thriller, you can hardly wait to see what happens next-- and you want to know what caused this disaster to fall upon people you've come to know and to care about. As a character study of how decent people survive when thrust into unthinkable circumstances, The Raven's Gift is alternately heartwarming, humorous, chilling, and hopeful. Ultimately this book transcends all these labels and becomes something very special indeed.