Moonlighting in Vermont by Kate George 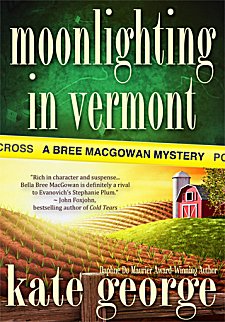 First Line: "Why. Won't. You. Open!" With every word I pushed my shoulder into the door.

It's not easy being Bree MacGowan. She works two jobs in an effort to keep her farm going, her vehicle running, and her menagerie of stray animals fed. About the only time she's not covered in mud is when she's working one of her jobs as a maid in a nearby five-star resort. And when you live in the small town of South Royalton, Vermont, everybody knows you... and everybody feels comfortable telling you what you should be doing.

When a universally disliked supervisor at the resort is murdered, Bree is first in the line of suspects. All her co-workers points fingers at Bree. Her boyfriend the lawyer dumps her. A reporter at the newspaper where she works lists Bree as the primary suspect. Even the police officer in charge of the case seems intent on pinning the murder on her. What else can Bree do but conduct her own investigation? If she goes to jail, who will take care of all her animals?

Moonlighting in Vermont won the 2009 Daphne du Maurier Award for excellence in mystery and suspense. It is a cozy with an engaging main character. Kate George has a light, humorous touch, and I liked the way she developed Bree's character. Bree's bright, funny, and good-hearted. She makes mistakes, but she learns from them. It was easy to find myself rooting for her to uncover the real killer.

If you're in the mood for something light and fun, you'd do well to make the acquaintance of Bree MacGowan. I know that I look forward to reading more books in this series.