Capacity For Murder by Bernadette Pajer 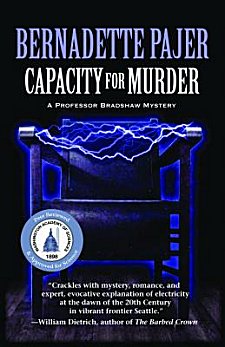 First Line: It all began with a freckle-faced youth delivering a telegram.

The University of Washington's Professor Benjamin Bradshaw is beginning to get a reputation as an electrical forensic investigator-- even beyond the city limits of Seattle at the turn of the twentieth century. When Dr. Arnold Hornsby of the Healing Sands Sanitarium in Ocean Springs, Washington, sends an urgent telegram for him to come investigate the death of one of his patients, Bradshaw agrees, taking a rather large party of people with him.

Once there, it takes Bradshaw only moments to see that Dr. Hornsby's equipment had been tampered with and that David Hollister was murdered. It almost has to be one of the guests staying at the sanitarium when Hollister died, but which one? Trying to find the answer is ultimately going to have Bradshaw sending his students and family members back to Seattle to get out of the range of a deadly killer.

The more Benjamin Bradshaw mysteries I read, the more I enjoy them. Author Bernadette Pajer gives quite a sense of Seattle in the early 1900s, as well as the feeling of possibility and advancement in the fields of science and invention. Even though my knowledge of the era is sound, I always learn something new whenever I read the latest investigation of this university professor. (This time I learned why-- when I was growing up-- some of the older folks called matches "safety matches." Believe me, safety was desperately needed!)

Benjamin Bradshaw is a man who has been severely scarred by a bad marriage and the death of his wife. He found some measure of peace by retreating into solitude, focusing on his son's welfare and on his own inventions, and by over-organizing his daily routines. I read quite a few mystery series, and many of them give the impression that the characters shut themselves away in a closet between books. Not so here. In Capacity for Murder, we find out some of the things Bradshaw's been doing to put a bit of spice into his personal life since the last book. For some reason, I like knowing that he's been out and about in between investigations; it adds a welcome bit of realism to any author's characterizations.

Life at a sanitarium in a rather remote seaside location is well-drawn, and I loved the various characters traveling from Healing Sands to the closest towns by Stanley Steamer. The identity of the killer is meant to be rather obvious; what's so good about knowing the person's identity is that you have more brain cells available to try to deduce just how the murder was carried out-- and the buildup of suspense leading up to the investigation's conclusion is excellent.

Bernadette Pajer's Professor Bradshaw mysteries give a true sense of the place and the era during intriguing investigations peopled by characters who evolve,  who make me care about them... and who make me laugh. Pajer's books just keep getting better-- and I happily recommend this series to all historical mystery lovers.