@ The Poisoned Pen with Alex Grecian!

When I first heard about author Alex Grecian's The Yard, a book about two Scotland Yard detectives working in London shortly after jack the Ripper's reign of terror, I thought it would be a book that I'd enjoy, and I put it on my wish list. It languished there for over a year.

The first time I saw the book in the flesh was on a prominent display at Waterstones in Cambridge, England. I picked it up, looked it over... and I couldn't put it down. It came home with me, and I read it shortly thereafter. The Yard is now one of my Best Reads of 2013.

By the time I heard that the author was going to appear at The Poisoned Pen, I was reading his second book in the series, The Black Country, and I knew nothing short of the direst emergency could keep me away that night!

"The Black Country is my Hound of the Baskervilles."

Author Alex Grecian first began by giving us a basic introduction to his Murder Squad series. The Yard begins in 1889, shortly after Jack the Ripper went on his rampage and then disappeared. The book shows how the world's most famous serial killer changed the city, police work, and how ordinary citizens began viewing law enforcement with real suspicion.

The Black Country takes place six months later when three members of a family disappear from a village up in the Midlands and a human eyeball is found in a bird's nest. The local constable knows that he's in over his head and asks Scotland Yard for help. Detective Inspector Walter Day and Sergeant Nevil Hammersmith are put on a train and given two days to solve the case.

"The Black Country is my Hound of the Baskervilles," said Alex. "I wanted to give Day and Hammersmith the opportunity to bond and form a relationship away from London and the other characters." He then went on to mention two elements he used to add to the Gothic creepiness of the book: the wicker man and Raw Head and Bloody Bones. A rhyme originating in Yorkshire and Lancashire was often used to scare children into good behavior:

Rawhead and Bloody Bones
Steals naughty children from their homes,
Takes them to his dirty den,
And they are never seen again.


Although Grecian didn't really intend to write a series, his agent told him, "I think I can get the publisher to commit to a second book if you tell me what it is"-- and that's how the idea for The Black Country was born. 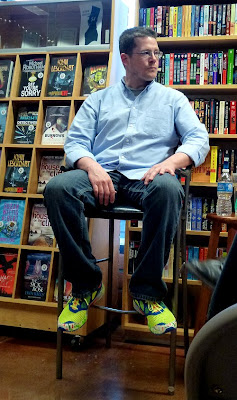 I found it particularly interesting when Alex talked a bit about the research he did for The Black Country. For the most part instead of reading histories, he read a lot of diaries written during that period in the area where the book is set. He read of people talking about children falling into pits and houses sinking into mines. He also preferred reading authors of the period (like Dickens) to today's historical fiction. With a wry smile, Grecian looked at us and said, "So... what am I doing?" which made us all laugh.

Interviewer Patrick Millikin asked Grecian about a quote he'd read about Mary Shelley. "Yes, I did say that I can't stand Mary Shelley," Alex admitted. "I like her ideas, but I don't care for her language." I don't think I was the only person in the room nodding my head in agreement with him.

Grecian enjoys doing research on this period because there's a real clash between science and superstition. Two of his main characters are based on real life people. Inspector Walter Day's forebear is Detective Chief Inspector Walter Dew, whose most famous cases include Jack the Ripper and Dr. Crippen. Dr. Bernard Kingsley is based on Dr. Bernard Spilsbury, Scotland Yard's first forensic pathologist. And as for handsome Sergeant Nevil Hammersmith... well, he's the action hero-- the Victorian Era's Bruce Willis. While Day and Kingsley show different sides of their creator, Grecian's wife has a big crush on Nevil Hammersmith. One of the reasons why Hammersmith quotes Wordsworth in The Black Country is to make the 19th century Bruce Willis a bit more like Grecian himself!

Winding up all the talk about research, Alex mentioned that, as a student, he loved history but hated history class:

It’s the rare history teacher who doesn’t just parade a series of dates and places in front of his students. I had to discover on my own that every date and place was “right now” for the people who lived there. And all those people had full lives, loved and hated and stole and lied and helped others and hurt others and eventually died. Every story you can imagine, except the ones with genies, happened to someone, somewhere. That’s what makes history interesting.

When asked about his background, Alex told us that he started out in advertising and also directed TV. He got used to drawing storyboards for everything he did, and this has influenced how visual his books are.

He also mentioned his series of graphic novels which fans refer to as "Secret Agent Sasquatch." Yes, the main character is a sasquatch, but John Prufock is actually Grecian's take on Tarzan-- who we are, and what it takes to be a person.

The third book in the Murder Squad series is The Devil's Workshop, and it's steeped in Jack the Ripper. (I can't wait to get my hands on a copy!) A strong element in the plot is Justice versus Legality, since many people at the time noted that the Ripper stopped killing when upper echelon members of law enforcement retired.

Alex also told us that he's already been asked about something that occurs in The Black Country. There is a character killed in the book whose body is never found. "I just want everyone to know that, yes, that was a purposeful choice," he said. "I didn't forget about that character!"

After all the books were signed and the other folks had walked over to join in the ice cream social, Denis and I had a chance to chat a bit with Alex. He'd glanced at me a few times during the interview. I have to admit that, between my white hair glowing under the lights, my camera and my notebook and pen, I'm probably hard to miss. When I introduced myself, Alex smiled and said, "I know who you are!" Hmmm... maybe I should go back to using a gravatar instead of an actual photo of myself if I want to remain incognito during these things! We had a wonderful chat, but when Denis and I left and were driving home, I exclaimed, "I forgot to tell him that I love his shoes!"