A Serpent's Tooth by Craig Johnson 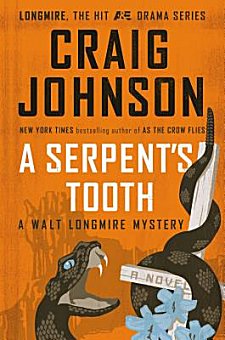 First Line: I stared at the black-and-orange corsage on Barbara Thomas's lapel so that I wouldn't have to look at anything else.

What should have been a rather carefree high school homecoming season in Absaroka County turns into a search for a missing person as Sheriff Walt Longmire attempts to reunite a homeless boy and his mother. Clues aren't easy to come by, but if anyone's going to find them, it will be Walt, his ornery deputy Vic Moretti, and lifelong friend, Henry Standing Bear because none of them know the meaning of the word quit-- and because all of them truly care about their fellow human beings. What comes as a bit of a shock during their search is the fact that an interstate polygamy group has moved into their county, and this group is carrying lots of fire power and a big grudge.

Craig Johnson's Walt Longmire series reminds me of a Navajo rug: both books and rug are joys to contemplate, but if you're looking for all the individual components that make them things to treasure, you find that the threads are so closely woven together that they're difficult to pick apart. If you do manage to pick a few out and you begin to list them, the person you're trying to convince may listen for a bit and then look at you as if a few too many of your own threads have come loose. In A Serpent's Tooth, some of Johnson's threads are polygamy (if you think that's a tale just for Utah and Arizona, think again), "My Friend Flicka," an escape artist who thinks he's a Mormon law man from the 1800s, a slow car chase, a black-and-orange corsage, and lost boys. Together, they (and all those other threads) add up to a subtly nuanced tale of the modern West that shows the Old West never died.

Craig Johnson can explore our world without using stereotypes or clichés. His intricately layered plots, note-perfect dialogue, and entrancing characters shine spotlights deep into our minds. How much greater could love be if it combined romantic love with a "band of brothers" mindset? We can explore this in A Serpent's Tooth. We can hoist Walt Longmire up on a tall pedestal because this man understands that the good fights have to be fought, regardless what their cost may be to him. If he turned his back on them, he would not be able to live with himself. And every truly good man deserves a friend who is his equal-- perhaps even his better-- and Walt has this in the Cheyenne Nation, AKA Henry Standing Bear. The Cheyenne Nation will add humor to Walt's life, he'll talk sense to him when others can't or won't, and he'll never, ever turn his back on the Sheriff of Absaroka County. They are more than friends-- more than family-- to each other.

These books make me laugh, they remind me of what I love about the West, and I enjoy trying to figure out whodunit, but Craig Johnson's talent brings a lump to my throat. This writer can write about life's truly ugly face, but he never forgets its soul.

If you've never read one of Craig Johnson's books, you need to correct this glaring oversight. If you're watching the television series "Longmire" on A&E and think you don't need to read the books, think again. What you're watching is the bare bones from the books. In fact the bones are so bare you probably can't even get DNA from 'em.  Start with A Serpent's Tooth. Bet you anything once you've finished reading this book that you'll be looking for all the others. Since 2004 whenever anyone's asked me for a recommendation, Craig Johnson always springs to mind first. Always.