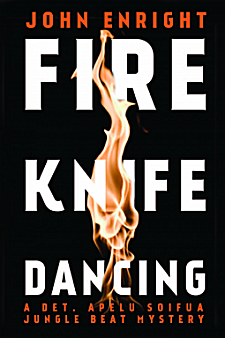 First Line: For many years it was the only house out there, a house of elegant exile.

Ezra Strand has been firing off a shotgun at hikers and boaters along the cliffs near his house again, and Detective Apelu Soifua goes out to the remote area to warn him. Again. But when the old man takes a shot at Apelu, the situation becomes serious. Taken into town and put in jail, the old man seems demented and refuses to speak anything but Samoan. Apelu knows better. Ezra and his wife ran a Polynesian dance troupe in the United States-- a dance troupe that Apelu performed with during summers and school holidays when he was a teenager. Ezra knows how to speak English. Then there's the matter of strange caches of supplies in Ezra's house. When Apelu goes back to investigate, the supplies have disappeared. Before he can do anything about it, the body of a young woman turns up, and Apelu is accused of her murder. He must clear his name, but the only way he can do so is by hiding out. Staying away from his fellow police officers and his family is his one chance to find the answers he so desperately needs.

I really enjoyed the first book in this series, Pago Pago Tango, and I'm thrilled to say that I loved this one. Enright does a superb job of showing the fine line that Apelu must walk between the two very different cultures of American Samoa and the United States. The detective has his hands full with his fugitive investigation, but even more tension is added by the strain that his marriage is under. He dearly loves his children, but he and his wife seem to be growing apart.

The author also brings the setting to life vividly and poetically with the "sea-peaceful starry nights" of the islands, the differences between Western and American Samoa, and how-- starting with World War II-- Western culture has been inexorably changing the landscape and its people.

The story moves swiftly, and in no time at all the reader is aware that Apelu has stumbled into a Gordian Knot of crimes. Separating the various strands and identifying the culprits leads the detective further and further into danger-- and kept me turning the pages faster and faster.

With his skillful blend of character, story and an unforgettable setting, John Enright has become an author whose books I do not want to miss.