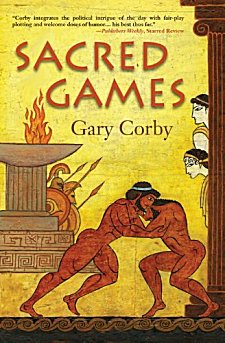 First Line: The procession wound past the Sanctuary of Zeus.

The procession consists of athletes, trainers, priests, officials, and spectators who are gathering for the Olympic Games of 460 BC. The most important contest is the pankration, the deadly martial art of ancient Greece. Nicolaos's best friend, Timodemus of Athens ("Timo"), is the favorite to win the pankration. When Timo's only serious rival, Arakos of Sparta, is found beaten to death, it's obvious to everyone that Timo has to be the killer. Timo is sentenced to be executed when the Sacred Games have finished. However, there is a political angle to this crime. Athens and Sparta are spoiling for a fight, and Arakos's death could very well be the catalyst. The politically savvy Athenian Pericles tells Nicolaos that he has four days to find the real killer of Arakos. To prevent a war, Nico and the priestess Diotima have to work fast.

I was sent this book by the publisher, and I have to admit that I came within a whisker of deciding not to read it. I really haven't dealt much with ancient Greece since my college days. I have no idea why I changed my mind, but I'm glad I did. I would have missed out on an excellent story otherwise.

Diving into this series at book number three wasn't confusing. The further I read, the more I wanted to read the previous two books because I was enjoying the story and the characters so much. Author Gary Corby knows his stuff. The time period and the culture came to life right before my eyes. However, Sacred Games isn't just a history lesson. The investigation kept my interest throughout, and when I wasn't figuratively sweating buckets under the Greek sun, I was falling under the spell of his two main characters, Nicolaos and Diotima, a beautiful, intelligent young woman who's Nico's wife in all but the eyes of their parents (and the law).  As a team, they work together quite well-- especially since Diotima provides most of the brain power. Corby didn't let things bog down in historical detail and seriousness, either. There are wonderful bits of comedy throughout, and several of them are provided courtesy of Nico's little brother, Socrates. (Yes, that Socrates.)

Have you ever read a work of fiction that is set solidly in history, that has real historical figures as members of the cast and wondered just how much of it is true? I felt this way with Sacred Games. Everything felt so right, but I still wondered. Corby was prepared for people like us. Included in the book are a cast of characters with pronunciations of their names, historical facts about the Olympic Games of 460 BC, a fascinating Author's Note, and a glossary. I don't always pay attention to such things in the books I read, but I was curious, so I read every bit of them. They add so much to the story that I would suggest that you read them all, too. Dive into this book. Immerse yourself in the entire experience. Chances are, you'll enjoy it every bit as much as I did.