Norwegian by Night by Derek B. Miller 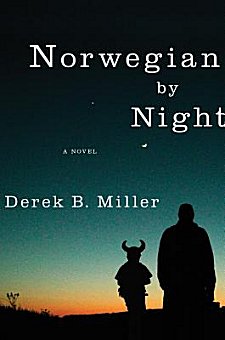 First Line: It is summer and luminous.

What neither one of them could possibly predict is an act of incredible violence that leaves a little motherless boy in old Sheldon Horowitz's care. Now the old man and the little boy are on the run from everyone who's chasing them, and we can only pray that the killer isn't the one who finds this odd pair first.

This is a book that defies categorization. It's part thriller, part police procedural, part road trip, part commentary on aging/relationships/dementia-- and it has flashes of comedy throughout. When I began reading this book, I was worried about Korean War veteran Sheldon Horowitz because I was remembering when my own grandfather lived with me. By the time I finished reading Norwegian By Night, I had a big smile on my face and wished that we could all be as demented as Derek B. Miller's main character.

This is a book that has so much to say-- and it manages to say everything in a rather concise manner. What this debut novelist says in 300 pages, most other writers would take at least twice the space. Miller never lets his foot off the gas-- this tale moves swiftly and surely from beginning to end. If you're the type of reader who wants a fast-paced book that starts at Point A and leads directly to Point B, you might want to give Norwegian By Night a miss. From time to time, the narrative wanders off onto dark alleys and narrow country lanes, as Sheldon visits the Korean and Vietnam Wars, memories of his wife and son... and as we learn a bit about the background of the silent little boy Sheldon is trying to keep safe. These diversions add a richness to the story that it cannot live without; they are the life's blood of Miller's characters. It takes an incredible amount of skill to be able to introduce these flashbacks and themes and not have them slow down the pace of the story, and Miller accomplishes it with ease.

The element of the chase keeps the story's pace flowing quickly, while those diversions add dimension to both characterization and to the themes of aging and regret that run throughout the book.  And when the action gets too scary or one of the themes gets too dark, Sheldon Horowitz is there to say or do something that will make us laugh.

This book fed my mind on so many levels! It's been a long time since I've finished a book with such a huge smile on my face, wanting to invite a character home to live with me. Should we all be as crazy as Sheldon!

Fiction, Standalone
Rating: A+
Source: Amazon Vine
by Cathy at Thursday, May 23, 2013