Telling the Bees by Peggy Hesketh 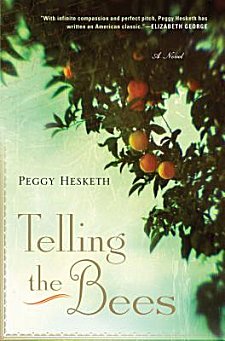 First Line: The bees travel along the high-tension wires, just as surely as one true sentence follows the next.

Albert Honig hasn't seen his next-door neighbors, Claire and Hilda Straussman, and that's unusual. Walking over to see if everything's all right, he goes into the house and finds both of the "Bee Ladies" dead, victims of a senseless accident during a burglary gone horribly wrong.

Once the best of friends, Albert is haunted by Claire's death, regretting the estrangement between them that occurred twenty years ago. As the years pass after the sisters' deaths, Albert continues to linger over each memory he has of them, and as he pieces these memories together, he learns not only some painful truths about Claire's life but also the healing power that laying the past to rest can bring.

At the beginning, I wasn't too sure if this book was going to be my cup of tea. Each chapter begins with a snippet of bee lore or behavior. Albert is an old man, and it swiftly becomes evident that he relates to the world around him through his beehives. When he finds the bodies of the dead women and Detective Grayson tries to question Albert about the sisters and about what he saw when he walked into the house, Albert refuses to answer anything directly. Everything has to be tied into beekeeping in as much detail as possible. I didn't know whether to take Grayson to the nearest bar and pay for the first two rounds, or if I should find the poor man some tranquilizers. In these first few chapters, Albert Honig is without doubt one of the most maddening characters I've ever had the misfortune to meet. But somehow, some way, author Peggy Hesketh works some magic because I became hooked on the story.

Albert's world is miniscule through his own choice. He's wanted nothing else but to live in his parents' home and carry on the family tradition of beekeeping. He seldom leaves except to get groceries, go to the library, or sell his honey and bee products. He sets himself worthy goals like reading the books of all the philosophers. He sits on the back steps at night and looks at the constellations in the sky above-- and he keeps as close an eye on Claire Straussman as he possibly can. Albert Honig is a man who's never lived life; he's merely observed it, but because he feels he's been raised so well and because he believes he's so well read, he feels perfectly comfortable passing judgment on the behavior of the people around him. I think one of the reasons why I became hooked on the story is because I felt contempt for Albert Honig, and I wanted to see if the octogenarian would ever have the scales removed from his eyes so that he could see the world as it truly is.

There is a mystery or two in this story, and the facts are gradually pieced together, and the truth does come to light. All the chapter headings about bees-- although informative and often foreshadowing the action to follow-- become a bit tiresome, but I think they serve a different purpose than mere foreshadowing. They allow us to glimpse into Albert Honig's compartmentalized, labyrinthine mind-- the mind of one of the most memorable and infuriating characters that I've come across in many a year.

My advice? Don't let Albert win. Be patient. Keep reading. There's royal jelly to be found throughout this tale.