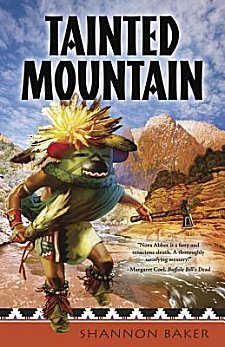 First Line: Frigid air ripped down her throat, searing both lungs as her heart threatened to burst through her ribcage.

Nora Abbott has thrown her heart and soul into her husband's dream: buying a ski resort outside of Flagstaff, Arizona, and turning it into a success. As a result, it's become her dream, too. But there are many obstacles in the way of making that dream come true. The prolonged drought has meant very little snow. Fighting for the right to make snow has brought hordes of environmental protesters  and Hopi Indians to the courthouse and  the resort, all with their own agendas, and it makes no difference that Nora intends to do this in as environmentally friendly a manner as possible.

Slashed tires, ruined equipment, fires, very real threats of bodily harm, a marriage that's turning sour-- Nora needs more stress like she needs another overdue bill-- but she gets it. Her husband is murdered, and energy baron Barrett McCreary, who wants to reopen the area to uranium mining, seems poised for a hostile takeover of the resort. The only help Nora can see on her horizon is Cole Huntsman, but even he seems to be playing both sides against the middle.

I looked forward to reading this book with a great deal of anticipation. I have a fondness for mysteries set in Arizona, and ones set in the northern part of the state are few and far between. Baker does extremely well with her setting up in the cooler, pine-scented mountains. The issues she highlights in her book are very real. The ski resorts in Arizona have struggled for years with the drought that never seems to end. The resort owners have fought for the right to make snow on the mountains, but these mountains are sacred to the Hopi people who believe that the entire process upsets the balance of the natural world. The area does have many old uranium mines which were closed because of the deadly conditions in which the miners worked, and there are those people looking to make a quick buck who want them reopened.

However, the characters did not live up to the setting and the issues. Barrett McCreary is a stock bad guy. We know this from the start, and the only real suspense lies in wondering how far he will go to get what he wants. Abigail Stoddard is the standard Mother From Hell who's traded on her good looks throughout her life to marry a succession of rich husbands to keep her in the manner to which she's become accustomed. Naturally nothing her daughter ever does suits Abigail. Cole Huntsman is the ambiguous handsome good guy, and while that ambiguity is good for the story, I didn't feel any real attraction between Cole and Nora.

Without doubt, the most annoying character is Nora Abbott herself. Yes, her mother made me gnash my teeth as I was reading, but Abigail was not meant to be a  sympathetic character. I wanted to like Nora. I really did. But the woman is a drama queen. The first line of the book immediately tells you that. Air rips, lungs are seared, a heart bursts... we are constantly updated on Nora's emotional state, and she never gets off the roller coaster. Every emotion, each physical experience is a superlative. It's exhausting and became such an annoyance to  me that it detracted from the story.

So the anticipation turned into somewhat of a disappointment. I do like the book for its setting and the issues that the author raised. There's some good stuff here, but when I read another Nora Abbott mystery, I sincerely hope that Abigail has taken an extended vacation (during the entire length of the book) and that Nora has a prescription for chill pills.