Too Big to Miss by Sue Ann Jaffarian 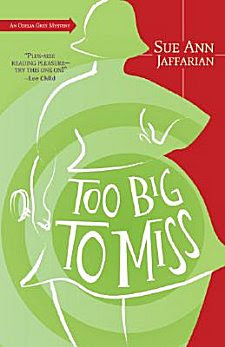 Odelia Grey is a middle-aged, never married, plus-sized paralegal who has a boss from hell and a family that-- if she had the choice between being beaten up or going to visit her relatives, she just might choose the beating. She's a much-valued employee, and she makes no excuses for her weight, her age, or her lack of husband and children. But she could stand up for herself a little more. In order to do that, she's always looked to her friend Sophie London, a plus-sized activist, to be her inspiration.

But when Sophie sits down in front of a webcam, puts a gun in her mouth, and commits suicide, the bottom drops out of Odelia's life. She's not the only one who will mourn Sophie's death-- many women in Sophie's support group depended on her strength, her common sense, and her humor to help them improve their lives. The more Odelia thinks about it, the more Sophie's suicide just doesn't make sense, and she decides to ask some questions and do a little searching of her own for the truth about Sophie's death. Her quest will take her to some very unlikely places: strip malls, the world of live webcam porn, and some of the wealthier suburbs in southern California.

I immediately liked Odelia Grey. She's sassy and smart and knows when to follow good advice during the riskier parts of her investigation. In summing up herself, she also sums up why cozy mysteries and their sleuths are so popular:

As usual, Zee was right. I wasn't the police or a detective. I was just me, a middle-aged, overweight, nosy woman. I was no more equipped to interview and cope with a conniving murderer than I was to play basketball with the Los Angeles Lakers. But I was hellbent on finding out the truth about Sophie's final hours, and that single-mindedness alone made me a formidable opponent. At least in my fantasy world.


It's funny how just the right amount of determination can make fantasies come true for all of us "just me's", and I like how Odelia's investigation not only finds a killer, but brings her closer to her old friends while making new ones, and gives her the incentive and the strength to attempt to fill Sophie's shoes in the future.

This character is a breath of fresh air. Normally overweight characters have limited roles in crime fiction. They either serve as background for the author to showcase personal disgust or unkind humor, or they could be considered suspects if only they weren't fat (because being fat means they're too lazy to commit murder), or they actually are killers because they were insanely jealous of the thin victim. Odelia Grey is none of these; she's a normal human being most of us would be fortunate to call friend.

Odelia, I'm definitely coming back to read more of your adventures. Oh... about playing basketball? I think you should go ahead and give it a shot. Looks to me like the Lakers need a little help this year, and you've proven that you know how to get things done!