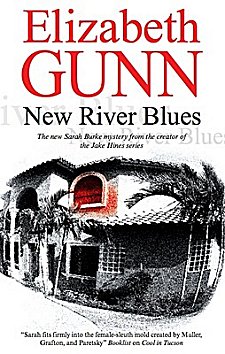 First Line: The party was big and very noisy at first, two or three groups that didn't mix very well and laughed at everything so they'd know they were having fun.

Tucson police detective Sarah Burke is called out to a double homicide in a wealthy neighborhood. While the property developer husband is away on business, his party-loving wife winds up dead in bed along with the boy toy of the hour. While the crime scene investigators are hard at work, the teenage daughter sneaks in the house and walks into the bedroom where the murders took place. Who's going to take care of her? Where is her father? Why isn't he answering his cell phone? And who's going to get in touch with the son who's in boarding school?

While Sarah is trying to find answers to all these questions, she's also got a lot to deal with in her private life. She is caring for her substance-abusing sister's little daughter, whom Sarah loves very much. Sarah wants to become the girl's legal guardian, but her sister's going to make that a very tricky proposition. The man she loves is definitely a keeper, but her little niece refuses to let down her guard around him. Sarah's mother is a terrific help, but now Sarah can see that something's not right with the older woman.

Elizabeth Gunn has created a series in which the character's personal life is every bit as interesting as the mystery-- and like the man in Sarah's life, this mystery is definitely a keeper. From a wreck on Interstate 10 to a very shifty batch of caterers to the final reveal of the identity of the killer (I can't believe I didn't figure that out!), I found this book very difficult to put down-- which is exactly the way I felt about the first book in the series, Cool in Tucson. This series is definitely one to be savored for its Tucson setting, its fully fleshed characters, and its engrossing plots. I'm torn between wanting to gallop through the books as quickly as possible so I can keep up with what's happening to Sarah and her family... and wanting to space out each book very carefully so I won't be impatiently waiting for the next. Decisions, decisions!