The Woman Who Wouldn't Die by Colin Cotterill 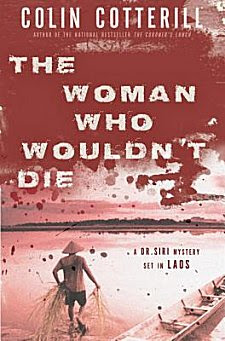 First Line: Madame Keui was flesh and blood, or so they claimed, although nobody could remember touching that rewarmed flesh, nor seeing her bleed; not even when a second bullet passed through her.

Well into his seventies, Dr. Siri Paiboun, national coroner of Laos, has finally been allowed to retire and enjoy life with his wife, Madame Daeng. But a general insists that Siri go with him to a remote village to find the remains of his long-lost brother, along with Madame Keui, a woman who returned from the funeral pyre as a clairvoyant.

Seeing that he must go, Siri makes certain that there are a few perks included with the trip. He's taking Madame Daeng and Mr. Geung, his former morgue assistant. And it seems that this is an auspicious time to go on a journey: there's a tall, handsome, older Frenchman who's been asking around Vientiane for the whereabouts of Dr. Siri's wife, and Dr. Siri doesn't like that one little bit. Little does he know that Madame Daeng might have something to be jealous about herself, since he seems to be falling under the spell of the pretty clairvoyant. Dr. Siri may not be aware of Madame Daeng's jealousy, but he is aware that there's more to this trip along the Mekong River than finding the remains of a big wig's brother. He only hopes that things don't turn deadly.

There were rumors flying around after the publication of 2011's Slash and Burn that there would be no more Dr. Siri books, and I'm thrilled to find the rumors to be false. The characters that long-time fans of the series have come to know and love are here in full force, along with all the gentle humor and the cunning logic of Dr. Siri himself. An added bonus of The Woman Who Wouldn't Die is that we learn more about Madame Daeng's past-- and an interesting past it is indeed. Siri encourages her to write her memoirs, and in them we learn that Madame Daeng was attracted to Siri from the moment she first saw him many years ago:

...Dr. Siri Paiboun...was a dashing, funny. intelligent man who taught us the real reason we should be proud. Not because some ancient king massacred another's army but because we were human beings. We had rights. We deserved respect.


Getting to see this married couple in their youth is a treat, even though it is served up with a side dish of sadness as we learn how Laos and its people have been treated through the centuries.

What makes this book the best in an excellent series is its plot. Cotterill ratchets up the suspense and dread to an almost unbearable degree as first one beloved character then another faces death. (When a killer walked into the building where Nurse Dtui was working, I exclaimed, "Oh, no you don't!" (Yes, I did say that aloud, and no, no one was in the room to hear me. Besides, I don't know what I thought I was going to do to save her anyway!) One of the reasons why Colin Cotterill's characters are so beloved is because they are good people: they treat everyone as human beings, they treat everyone with respect-- and when you read stories about such people who are also filled with love and humor and wit, you can't help but care deeply about them, too.

If you've never read one of the Dr. Siri mysteries, please... pick up this one and read it. Chances are you'll love the story, you'll love reading about life in Laos in the 1970s, and you'll go crazy for Dr. Siri and the rest of the superb cast. And don't be surprised if you find yourself getting your hands on all the rest of the books in the series.