Anatomy of Murder by Imogen Robertson 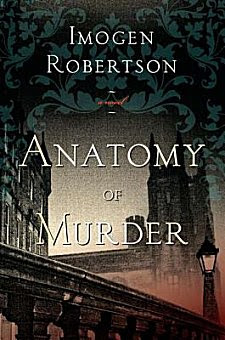 First Line: Captain Westerman was in his cabin reading the letter from his wife for the fourth time when he heard the officer of the morning watch ring Six Bells.

It's 1781, and Harriet Westerman finds herself in London. Her husband, a ship's captain, has been very seriously injured while capturing a French vessel, and Harriet needs to be near him during his recuperation.

She and the reclusive anatomist Gabriel Crowther have become famous (or infamous) as amateur detectives for solving the mysteries of Thornleigh Hall, which occurred in the first book of the series, Instruments of Darkness. The British government requests their skills as detectives in investigating the death of a man whose body was pulled from the Thames. Harriet's presence at her husband's bedside is doing him no good. Since the doctor tells her to occupy her time in some other fashion-- and because "requests" from the government can seldom be ignored-- the team of Crowther and Westerman find themselves unraveling a plot filled with spies and betrayal.

Once again author Imogen Robertson immerses the reader in the England of the late eighteenth century. The setting, the time period, and the plot are all engrossing, but as with any high calibre mystery, the characters are what lift everything to a more lofty, enjoyable plane. We meet Harriet's husband, Harriet can now be seen as an anxious wife, and the hermit-like Gabriel Crowther is slowly becoming used to Harriet, her family, and just dealing with the general populace. (When you've avoided the public for years, it can take a while to get reacquainted.) Robertson's characters are anything but static and one-dimensional; things happen to them, they grow, and they change. Put this interesting cast in the middle of a genuinely puzzling investigation, and you experience a little bit of mystery reading nirvana.

If you're a fan of historical mysteries, strong characters, intriguing plots, and a rich, almost Dickensian setting, I'd advise you to read Imogen Robertson's Crowther and Westerman series.