The Sound of Broken Glass by Deborah Crombie 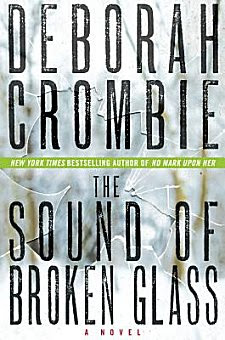 First Line: It had been years since she'd been in an English church.

With their youngest child having difficulties adjusting to any sort of daycare, Gemma and Duncan find their plans for the weekend ruined when Gemma is called out to investigate the murder of a lawyer. While Gemma goes through the crime scene, once again Duncan is at home being Mr. Mom-- something that he's adapted to much better than Gemma ever thought he would. But Duncan's leave is almost up, and he is looking forward to being back in the world of adults again.

While interviewing the people who last saw the victim, Gemma's partner, Detective Sergeant Melody Talbot, finds herself drawn to a talented young guitar player. When another lawyer is murdered in much the same way, Gemma and her team have to wonder: is someone following the advise of Shakespeare ("The first thing we do, let's kill all the lawyers."), or is something else going on? Regardless the option, all they can do is to continue digging until they have enough facts to lead them to a killer or killers.

This fifteenth book in Deborah Crombie's marvelous series finds Gemma, Duncan, and their three children learning that life as a family is always a work in progress. We also get to follow along as Gemma works with her team and learns each officer's strengths and weaknesses. The fact that her sergeant seems to be falling in love with a possible suspect could have grave repercussions, but all Gemma can do is give her a few small bits of advice and hope that Melody uses her common sense.

The story has several subplots woven into the narrative, and they all tie into the general area in which the first murder occurs: Crystal Palace. Each chapter begins with a quote about this area. They add depth to the story and to our knowledge of the British music industry. Melody's handsome guitar player, Andy Monahan-- a young man Duncan Kincaid met in a previous investigation-- is a major figure in the book, and his backstory is both heartbreaking and inspiring.

The story is so intriguing that the solution to the murders came as a surprise, but as any fan of Crombie's series knows, the mystery isn't the be-all-and-end-all of the book. The main characters are every bit as important, and The Sound of Broken Glass ends with a bit of a shocker that will make all devotees wonder what's in store in the next book.

If characters are as important to you as a cracking good story, you really need to get your hands on Deborah Crombie's books!