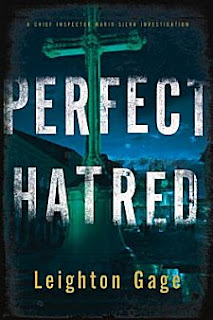 The old adage "it never rains but it pours" has never been truer for Chief Inspector Mario Silva and his team. A suicide bombing which is the apparent work of militant Islamists has killed over sixty people, but the assassination of a gubernatorial candidate during a campaign rally has Silva's superiors screaming. Told to focus on the assassination, Silva doesn't. He divides his team so both cases are being worked simultaneously. He refuses to ignore the slaughter of innocents. After all-- he's been on the job long enough to know how to work around the men in higher positions.

An assassin, terrorists, tracking down explosives in Paraguay... that would be enough for anyone to handle, but there's something that Silva isn't aware of: a criminal who's just been released from prison has vowed to kill him, and he's going to do his best to get the job done.

If you want to read crime fiction set in present-day Brazil, the very first author whose books you need to get your hands on is Leighton Gage. He gives us a clear-eyed look into a system filled with corruption and bribery, but Gage also shows us that there is justice to be had. How? Through the character of Chief Inspector Mario Silva. As Silva tells someone:

"Senhora, I've been in the service of a corrupt legal system for all of my working life. I'm nothing if not a pragmatist."

"That's what Luis said. That's why I'm telling you all this."

"But I'm also an idealist. And any evil I do, I attempt to do for the greater good."


For every corrupt politician, for every bribe-taking police officer, for every barbaric person of undeserved privilege, Leighton Gage shows us that there are those who are brave enough to tell the truth and to insist upon justice for all. Chief Inspector Mario Silva and his team are among those who persist in fighting for what's right-- and one of the ways they do it is to band together as a family, to know each other's strengths and weaknesses, to make bad jokes amongst themselves to lighten tense situations. This team is one that you grow to care deeply about, and the subplot involving the criminal planning Silva's death can make your blood run cold.

All three subplots-- bombing, assassination, threat on Silva's life-- are engrossing, and watching each come to its conclusion is a pleasure. Whenever I learn that Leighton Gage has a new book coming out, I smile. I know I will be whisked off to a distant land filled with excitement, outrage, and danger, but a land where I will also be among my fictional friends. I know I said earlier that you should read these books if you want to read about present-day Brazil-- and you should-- but you should really read them if you like crime fiction writing at its best.