The Man Who Died Laughing by David Handler 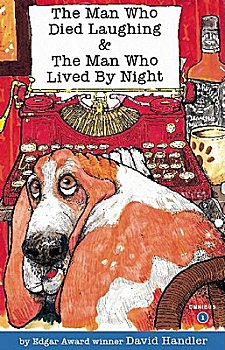 First Line: I was dreaming about Merilee when the phone woke me up.

Stewart Hoag (call him "Hoagy" for the cheese steak) is a one-hit wonder in the world of publishing. He just can't seem to get a second novel written, but he's going to have to do something if he wants to pay the bills and provide his basset hound, Lulu, with the food she craves.

A way to pay those bills sweeps in one day in the form of Sonny Day, one half of a comedy team that was the greatest thing since sliced bread in the late 1940s through the 1950s. Sonny's career needs a shot in the arm, so he convinces Hoagy to ghostwrite his autobiography. In it, Sonny promises to reveal what made him split with his partner, straight man Gabe Knight. This division rocked Hollywood and would guarantee phenomenal book sales once the book is published.

Against his better judgment, Hoagy finds himself (and Lulu) swept up in the whirlwind of Sonny's personality and ensconced in his guest house in the California sunshine. Work is going well until odd things begin to happen. It's crystal clear to Hoagy that someone is willing to kill in order to stop the book. Hoagy doesn't want anyone to die, but he's so close to finding out Sonny's secret that he really doesn't want to stop now.

This first book in the series doesn't really read like a mystery, but I didn't particularly care. Yes, I caught the thing that Sonny let slip one day that Hoagy couldn't remember, so I wasn't surprised at the reveal. Yes, I caught Lulu's reaction at a crucial moment, which further lessened the shock value. It's almost as if Handler hadn't started out with the intention of writing a mystery. I still don't care. I enjoyed this book because Handler knows how to write characters, and he knows how to tell a story. Hoagy immediately had me on his side, and all Lulu had to do was bat her big brown eyes and she had me wrapped around her paw.

The other thing that really won me over was the way that Handler gives the reader a sense of how to ghostwrite a book. Most of The Man Who Died Laughing is parceled out through the recordings Hoagy has for each person's interviews. We learn about Hoagy-- and we learn about the subject of the interview-- through their conversation. The interviews concentrate on Sonny in the beginning, and I got a feel for Hollywood during World War II through the 1950s-- what it was like to star in hit movies and a variety show on television. I really came to care about Sonny Day-- until Hoagy began interviewing other people, and I was set back on my heels. I'd been seeing everything through Sonny's eyes, and it was enlightening to see the same things through the eyes of the other people in his life. Very, very effective, Mr. Handler! (Just reel me in and put me in a net.)

I'm glad that this volume also contains the second book in the Hoagy and Lulu series because I really want to see what happens to these two next!