The Llama of Death by Betty Webb 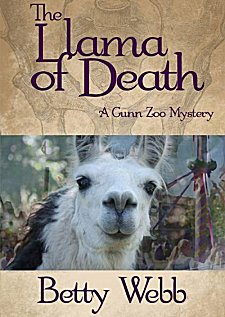 First Line: "Alejandro, you spit in my face!"

Once again, the owner of the Gunn Zoo has strong-armed zookeeper Theodora "Teddy" Bentley into doing something she'd rather not. Not only does Teddy have a weekly program called "Anteaters to Zebras" on the local television station, not only does she have to keep on cleaning animal enclosures and feeding the animals, now she has to dress like a trollop and lead Alejandro the llama around while he gives children rides at the Renaissance Faire. Alejandro adores children, but-- as can be seen by the spit on Teddy's face-- he has an entirely different opinion of human adults.

Is Alejandro's low opinion of adults what caused him to stomp to death the owner of the local wedding chapel? Fortunately not-- closer examination shows that the man dressed as Henry VIII was killed by a crossbow bolt to the neck.  Teddy's fiancé may be the sheriff, but the CIA has him in Langley, leaving the investigation to a completely incompetent deputy who likes Teddy's mother as the killer. Teddy has to do her own investigating before the deputy can tie her mother to the railroad tracks, and what she begins uncovering makes for one very long suspect list... and puts her right in the killer's sights.

Author Betty Webb may be better known for her more serious Lena Jones mystery series set in Scottsdale, Arizona. Her Gunn Zoo series, set on the central California coast, features a beautifully done comedic touch and lots of down-to-earth information on animals. I've read each book in this series, and they just keep getting better. From smiles and chuckles, I've now progressed to laughing out loud while reading this third book. I also feel that Alejandro is the best "feature creature" so far in the series.

I've known Betty has a wonderful sense of humor just by reading her blog. Her Lena Jones series, which tends to focus on human rights issues, is excellent, but it is good to see her put her talent for laughter to good use. Wonderful characters, interesting animals, intriguing plots, and comedy, too. Let Betty tickle your funny bone at the Gunn Zoo, too!