It's a brand-new year, and my spreadsheet now has a page labelled "2013".  I'm not a person that makes resolutions, but I do love maps, so that must mean that I like to take a look now and then to see where I've been. I also love to make graphs, so watch out-- I'm about to take you on a tour of last year's reading, and I've gone graph happy! 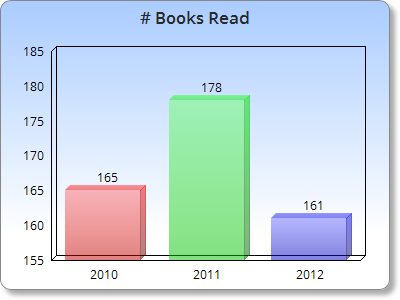 I'll start off by showing you the number of books I've read each of the past three years. It's been an unofficial goal of mine to read 200 books in one year. I came close in 2011, but lost a bit of ground in 2012. Do I know why? Yes, I think I do. I had a difficult time adjusting to a change in my husband's work schedule, and it threw me off stride. Will I make my goal in 2013? Who knows, but thirteen has always been my lucky number! 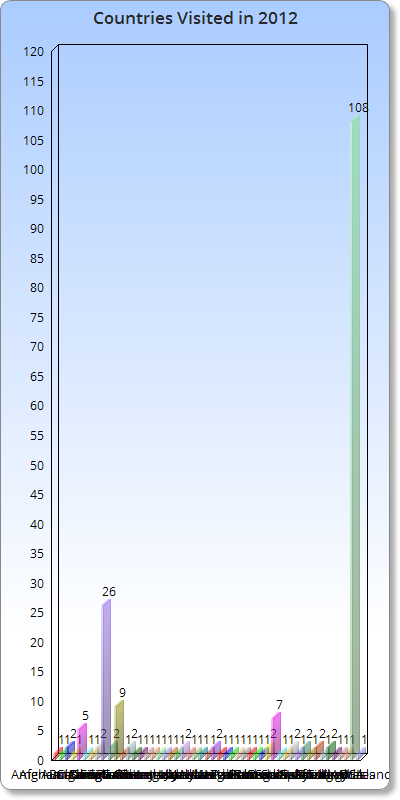 Those of you who've been reading my blog for a while (bless your hearts!) know that I'm an armchair traveler when it comes to the books I read.

I do like to seek out books set in new-to-me countries, and I did find a few of those this year.

New settings were scattered around the globe: the Caribbean, South America, Europe, the Middle East, Asia... my motto is Have Book, Will Travel! (Literally and figuratively!)

Some of the settings that stick in my mind the most? The Switzerland of Jon Steele's The Watchers, The Iran of 1979 in Libby Fischer Hellmann's A Bitter Veil, and American Samoa in John Enright's Pago Pago Tango.

Of course the graph also makes it easy to see where some of my favorite stops are!

When I saw the number of books I read that were set in the United States, naturally I had to do a breakdown by state to see where I was visiting most often. I visited 39 states, and seem to have a decided preference for California. (When reading, anyway!) You can see the state-by-state breakdown below: 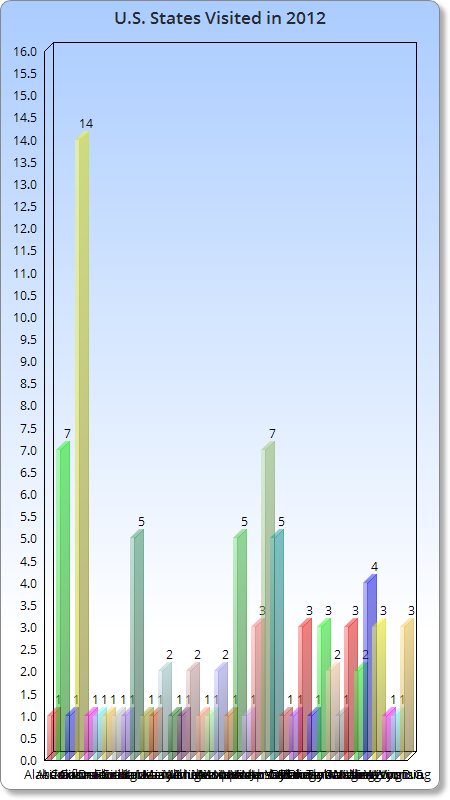 Since I am now the owner of both a Nook and a Kindle, I wanted to see how much my reading had shifted from physical books to eBooks. As you can see, I did read more eBooks in 2012, but physical books are still the winners by a large percentage.

Do I predict a change in 2013? Yes, I do. Denis and I have trips planned, and I am determined to travel with eBooks. Something tells me I won't know what to do with all the extra space in our luggage! 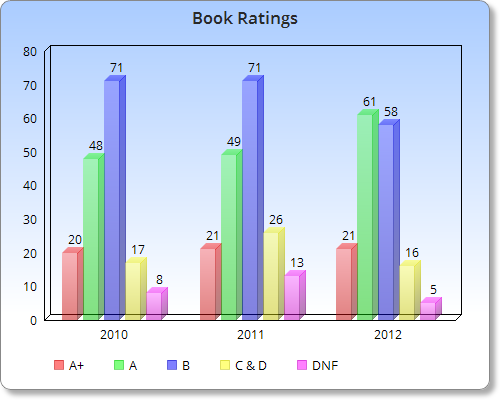 I also wanted to take a look at how my book ratings have fared over the past three years.  As you can see, I like most of the books I read. At this point in my life, I can read a book synopsis and pretty much tell you whether or not I'm going to like the book. Book cover art really doesn't draw my attention. Book titles do, and then I head right for that synopsis. They're much like movie trailers. Read enough of 'em, and you can deduce which ones contain all the best parts in the advertising. Is that how you are with book synopses?

By the way... for any of you who wonder what the titles of those A+ books were for 2012, you can check out my Best Reads of 2012 page. I refuse to choose just one from that list to be the Best of the Best. I loved 'em all! 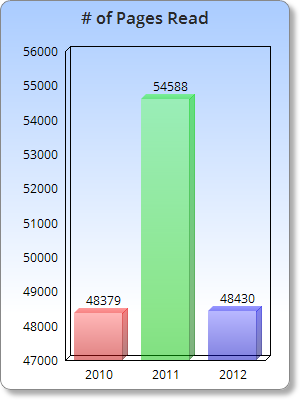 Wow! Maybe I'd better list my reading by pages read instead of by books read! These numbers are much more impressive!

The only bad thing about this graph is that it makes 2010 and 2012 look like years of horrible reading slumps! 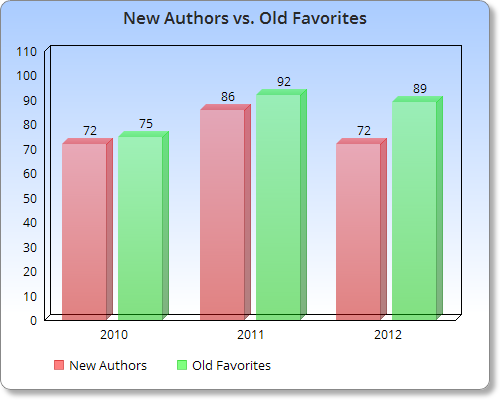 Another thing I always want to know is-- how am I when it comes to finding new authors to read? The past three years show that just about half the books I read are by new-to-me authors. I like that. 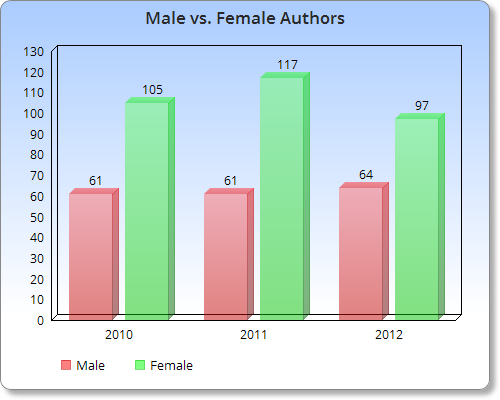 Male and female authors is another statistic that I like to track simply because in 2009, the vast majority of the authors I read were male! I remember thinking to myself that I needed to make a bit of an effort to read more female authors, and that thought obviously took root because, for the past three years, I've read more female authors. By looking at the graph above I can see that the gap did narrow in 2012. 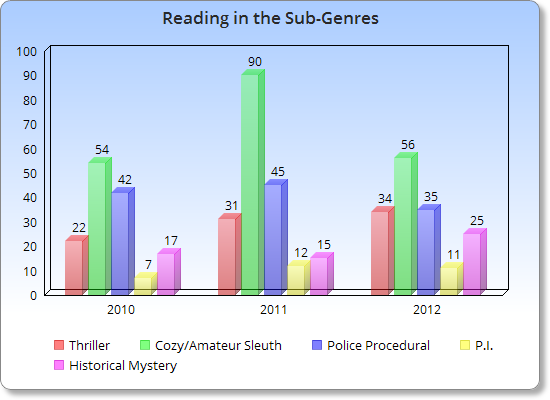 My reading in the sub-genres of crime fiction seems to be rather stable. I see a bit of a preference for cozies and police procedurals, but thrillers and historical mysteries seem to be on the rise. I'm looking forward to seeing the results for 2013! 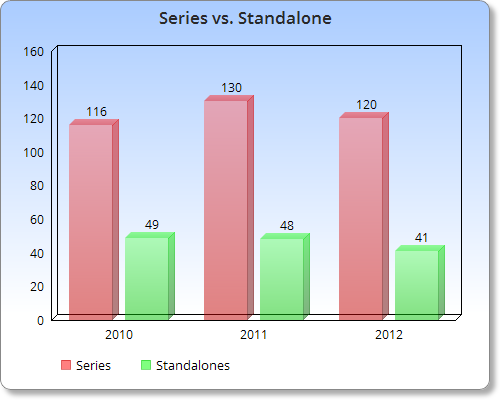 As many of you are aware, I am definitely a serial reader, and the graph above proves it. In fact, the ratio of series to standalone has remained fairly stable the past three years. I find it a bit odd that this stability recurs so often throughout the statistics when I'm not making a conscious decision to do so. 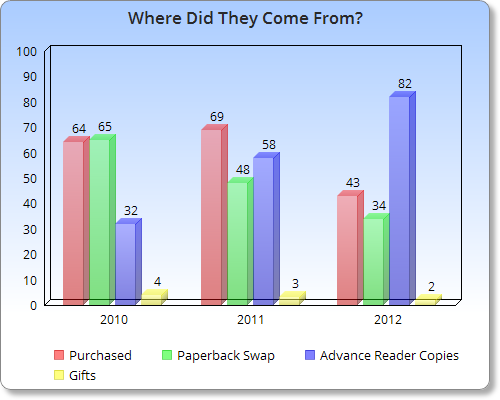 The last thing I wanted to know is-- where did all my books come from? As you can all see in the graph up there, one category has risen steadily the past three years: Advance Reader Copies. The dew is decidedly off the ARC lily. I have been pulling away from situations in which publishers just send me countless ARCs to read. In fact, I no longer feel obligated to read ARCs that I have not personally requested. There were at least three times during 2012 when I turned into a grouch because it seemed as though ARCs were the only books I was reading. I still buy books, and I still receive plenty of lovely books through Paperback Swap-- and they've been languishing on my to-be-read shelves.  No more! When I type up my year end post for 2013, I want to see a drastic shift in that ARC category. Make it so, Cathy!

And on that note of empowerment, I hope each and every one of you has a fantastic reading year ahead of you!