Scare the Light Away by Vicki Delany 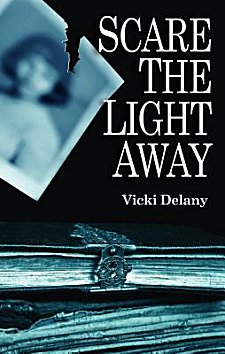 First Line: I stood outside the hardware store at the unmarked intersection.

Widow Rebecca McKenzie has returned to Hope River, Ontario, after an absence of thirty years to attend her mother's funeral. Thirty years ago she was escaping from an abusive childhood and a psychopathic grandfather, and she's never wanted to go back. But here she is, amongst the family members she left behind so long ago, and she can see how much things have both changed... and remained the same. This is a visit that Rebecca vows will be short, but when asked by her father to go through all her mother's things, she discovers that her mother had kept diaries since she was seventeen.

At first reluctantly, but then more and more voraciously, Rebecca reads her mother's diaries, and learns of her mother's experience as a bride during World War II, as this young woman brings a baby to a new country, watches her husband change once he's back home, and experiences those family dynamics for herself.

All the while, the police of Hope River are searching for a missing girl, and the townspeople have already made up their minds as to the identity of the person responsible: Rebecca's charming brother Jimmy. Some of those people aren't shy about letting their feelings be known, and as the days pass, Rebecca finds herself and other members of her family to be in very real danger.

Once I began reading Scare the Light Away, I found it difficult to stop. I, too, come from a small town, and twenty-five years elapsed before I went back. Although my situation was very different from Rebecca's, I found it easy to put myself in her place and to feel her reluctance to be back where she grew up. The reader knows almost from the first page that something is very wrong in Rebecca's family, but Delany takes the time to set her stage and bring out her characters before any real information is given. It's important to get to know Rebecca and to see how much she can be trusted as a narrator before continuing on with the story. I enjoyed that process very much.

Much the same process is used when bringing out the diaries. Rebecca's mother's story is brought forth a scene at a time, and months or years can pass between these glimpses. Between Rebecca's story and her mother's, the reader begins filling in the gaps, and the suspense that has been building continues to grow. Delany never relies too much upon those diaries, but makes the reader rely on both Rebecca, her mother, and the reader's own observations to piece everything together.

With my small town background, I found the behavior of the more violent residents of Hope River to not only ring true, but to be downright chilling. The combination of the strong character of Rebecca, her mother's diaries, and the present-day crime proves to be an engrossing one. Vicki Delany not only knows how to write excellent series, she writes thrillers that can't be put down, too. Whether you're a series reader or one who prefers standalones, I urge you to read (at least) one of this talented writer's books.

Suspense, standalone
Rating:A
Source: Purchased as an eBook from Amazon.
by Cathy at Thursday, January 24, 2013