Murder on the House by Juliet Blackwell 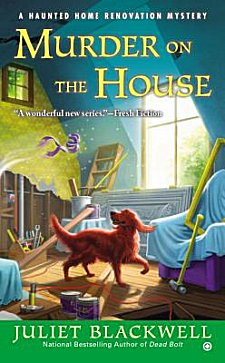 The word is out. General contractor Mel Turner has been named "California's most promising up-and-coming Ghost Buster" by Haunted House Quarterly. An Indiana couple has an arrangement with the owner of the historic Bernini House to buy it and turn it into a haunted bed-and-breakfast. Only two contractors are still in the running for the project: Mel and Josh Avery of Avery Builders. The couple has a novel idea for choosing their contractor. Mel and Josh have to spend the night in the house, and the one who stays in the house longest wins.

Mel already knows the house is haunted because she met and spoke with the spirit of a little girl who died a century ago. Armed with that knowledge, she brings an entourage of friends to the sleepover. Unfortunately the house gains another ghostly occupant when someone doesn't survive the night. Somehow Mel has to cajole the reticent spirits into revealing the identity of the killer, and as she tries, she risks becoming a permanent (if ethereal) resident of Bernini House herself.

I enjoy this series for many reasons. Blackwell treats her readers to a bit of the history of the San Francisco area in these books. This time it's the colorful and vibrant Castro District. Readers also get a good idea of just what a general contractor does during the renovation of historic homes. The plots are fun, too. In this third book, the elderly woman who owns Bernini House is the type of woman who makes a habit of promising people things in order to get what she wants. These promises wind up adding many names to the suspect list.

As in any cozy mystery worth its salt, it's the cast of characters that keeps me coming back for more. Mel is hard-working, talented, and funny, and I love how she tries to adjust to her new ghost buster status. Her father, her stepson Caleb, her friends... Mel is surrounded by an interesting mix of people who add a lot to the enjoyment of the book. The paranormal angle is well done, too. Since Mel deals primarily with old houses that have lots of history and colorful owners, most people would expect a ghost or two to pop out of the woodwork. Depending on their dispositions, they can either give Mel a lot of help or be frustrating hindrances.

If you love mysteries that take place in wonderful old spooky houses and have a good cast of characters, I definitely recommend Juliet Blackwell's Haunted Home Renovation series.