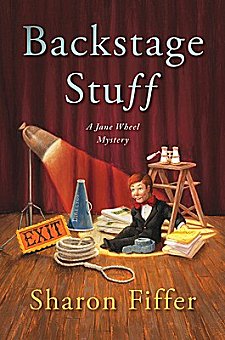 If divorce weren't staring her right in the face, Jane could probably sleep the night and day away. But lawyers are wanting detailed lists of income and expenditures, and she's finding it much easier to learn how to check in with her son Nick on Facebook, Twitter and text messages than it is to sit down and compile everything the lawyers want.

Fortunately her best friend Tim knows just what to do to get Jane out of her doldrums. Not only is there a mansion on the outskirts of Kankakee, Illinois, that's stuffed to the rafters with treasures that need to be sorted, tagged and priced before the estate sale, Tim has also unearthed a play written by the mansion's former owner. He's directing and starring in the murder mystery and needs Jane's help with props and the like. But when the show's carpenter dies under suspicious circumstances, Jane becomes convinced that someone definitely doesn't want the show to go on-- and that someone might even be willing to kill to stop it.

These Jane Wheel mysteries are among the select few that I tuck away, knowing that if I'm in need of a guaranteed good read, Jane won't let me down. Backstage Stuff reinforced my belief in Jane Wheel and her creator Sharon Fiffer. In this seventh book in the series, Fiffer used misdirection (in the form of multitudes of creepy ventriloquist's dummies) brilliantly to keep part of the plot from being revealed too soon.

As good as the mystery was, it's always Fiffer's characters that get the lion's share of my attention. Jane has been quietly evolving throughout the series. She's being forced to change more quickly now due to her impending divorce, but she can still describe Bakelite and vintage kitchen linens in such a way that my hands start to tremble with my own desire to find such treasures. I also like to see how Jane is learning more of the art of being a private detective through her work with Detective Bruce Oh.

And-- as always-- Jane's mother Nellie continues to be one of the most contrary characters in crime fiction. Nellie does everything on her own terms. If you're lucky, you might get an explanation for something once every couple of decades, but mostly you're going to be out of luck. Nellie doesn't explain, she doesn't apologize  (in fact she can make you want to strangle her), but when all is said and done, this tiny cantankerous woman demands-- and gets-- my respect. Normally a character as mean-spirited as Nellie would be tossed on the scrap heap of my disdain. That she continues to garner my curiosity and respect is a mark of how skillful Fiffer is at her portrayal.

In fact, I could go on for paragraphs about Sharon Fiffer's characters in the Jane Wheel series because they all feel like family. If you like excellent puzzles to solve, vintage treasures to discover, and characters that make you feel as though you've come home, do what I do: open a Jane Wheel mystery.

Cozy Mystery, #7 in the Jane Wheel series set in Kankakee, Illinois
Rating: A
Source: Purchased through PBS Marketplace.
by Cathy at Friday, December 28, 2012